In March 2021, we introduced our first comprehensive internal program for Flying Labs. Unfortunately, while our Drone and Data team invests most of their time, expertise, and wisdom into creating many technical guidelines and workflows, we missed a bundled collection of “how to succeed in creating impact with drone data.” And our best take at describing impact was “Turning Data into Action.” First, the team invested more than six months researching both successful and failed drone data projects of Flying Labs to identify the “secret sauce” that leads to success. Then, we compiled all the learnings drawn from that analysis into a comprehensive program that includes an easy-to-use checklist supported by a detailed handbook with methods, tips, and tricks.

To put the program to the test, we awarded 6 Flying Labs (Namibia, Kenya, Zambia, Zimbabwe, Benin, and Papua New Guinea) with microgrants to test the program with an actual project. The six microgrant awardees have openly attest to this game-changer program being one of the most strategic approaches in their projects and yielded exceptional results. The projects launched cut across city resilience, environmental protection, and disaster preparedness.

These six trial runners set the ball rolling for Turning Data Into Action (TDIA) last year to test and evaluate the effectiveness of this program. In a nutshell, the TDIA was born through the realization that the data being produced by the Flying Labs was often not being utilized at the end of the day for various reasons—the major one being the lack of understanding of the stakeholders’ side on how it could be used. Thus, Turning Data into Action bridges this gap by equipping the Flying Labs with tools and techniques that they need to facilitate a positive impact by improving the stakeholders’ data literacy and the ability to read and use the data produced by flying Labs.

“Treat the checklist and the handbook as your holy grail. It is your guide to everything,” highlighted Zimbabwe Flying Labs.

It remains no secret that every project will have its fair share of twists, turns, surprises, and tiny victories to comprise its overall success. Consequently, a certain amount of sweat and turmoil may have been felt during the duration of these FL projects. Still, despite this, all the participants were able to strive through and come out with their heads held high as they managed to complete their projects and, most importantly, put into practice the data produced to the benefit of their stakeholders.

‘Turning data into action’ is a broad concept that can mean different things to each of us. To one, it may mean ensuring data is used to the effect of a short-term solution. To another, it could be the continuous implications of the solutions to eradicate a particular challenge. In addition, the microgrant participants took into account the homogeneity of stakeholders, community engagement, and the impact they could create from the data they collected. Finally, it meant presenting data that can be used for people to make more informed and calculated decisions based on the information that they have.

“The stakeholders have more accurate, better understanding and realistic data on what is truly happening on the ground and would be able to actually make a decision that will benefit their whole community,” mentioned Zimbabwe Flying Labs.

It was further brought to light when Zambia Flying Labs took a more inquisitive approach to tackle this meaning. Turning data into action can only have meaning and value depending on who the data is created for.

“What exactly wants to be achieved at the end of the day?” stressed Zambia Flying Labs

They also mentioned looking at Turning Data into Action in terms of two aspects. The first is increasing the value addition by making the data actionable, and secondly, looking at the end-user of the output. The data being produced must be foolproof to the end-user. They can use the data to solve problems they are currently facing or challenges possibly faced in the future. 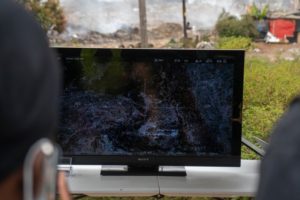 We often get lost in our thoughts of past experiences and think of ways of how we could have done things differently, how we feel we may have rushed through certain elements and wasted time on parts that did not matter. Unfortunately, it is a norm in virtually most aspects of living, and such remains true even with our microgrant winners.

In this regard, participating Flying Labs felt that they would have made changes if they could turn back the wheel of time.

“Better planning, preparation, and having more people involved in the project as only two people from our team could travel to the site,” Namibia Flying Labs said.

Fatigue can take its toll, especially when handling delicate and sensitive projects. Being emotionally mindful and physically and mentally alert is no child’s play. It is cardinal that details are looked into and addressed as soon as practical to prevent unnecessary project drag. The works of the projects are open to different tools, as long as quality, relevant to the project, and will assist in the effectiveness and efficiency of the project.

“I would try to integrate more than one technology for the project,” added Kenya Flying Labs after mentioning that their drone collected data would have been excellently augmented with open-source satellite imagery.

There’s always one major element that plays a crucial role in facilitating the impact needing to be achieved, and for the Flying Labs, this element was rooted in communication. From the beginning of the projects, relating to the communities was best done through higher and common authorities. “This made the communities more welcoming in reaching our area of interest and safer to work on,” mentioned Namibia Flying Labs.

When embraced, communication ensures that stakeholders are better equipped to understand their outputs, confidently further this information to their higher authorities, and are on the same page. “How you deliver the insights will make a huge impact or difference. Something palatable and not too technical will go a long way in making the insight ready to be used.”
emphasized Kenya Flying Labs

In addition to communication, being acquainted with how the data is shared is paramount. Trying to integrate the data into the already existing systems of the stakeholders proved appreciable. Asking questions such as “Who is going to use this data,” and “do they have the capability to understand the data,” enabled a high level of stakeholder engagement.

Also, our participants could not over-emphasize that the presentation of data to the stakeholders was yet another key element in creating impact. It was centered around ensuring the stakeholders understood the data presented before them. Simple tactics such as shying away from technical terms and expressing the data in layman’s terms proved one of the most effective ways of getting the message across of what was being shown to them.

Last but not least are the take-home tips and best learning practices to keep in mind as more projects are taken on in the future. 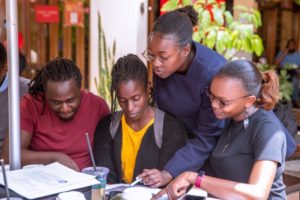 Kenya Flying Labs said, “Start with empathy before we can even think about what solution we are bringing. Think about who the solution is for and put yourself in their shoes, so you can be able to right from the stars be aligned with the real problems and be able to deliver an appropriate solution.”

Zimbabwe Flying Labs added, “Start early, unlearn how you do projects today and learn how to do projects the Turning Data into Actionway. It takes time to relearn and apply the checklist. It’s a mindset shift that should be taken into consideration, emphasizing on the part of unlearning and relearning with all the Flying Labs.”

Namibia Flying Labs advised, “Do not schedule projects too close to each other, engage with the community expressing what you are doing to the community in an appropriate way.”

Zambia Flying Labs concluded, “Involving different people that will benefit the project. Take a concept of operation approach, look at the stakeholders who definitely want the project done and other people affected by the project such as the community. Have the right people as partners as stakeholders to open doors.”

The outcomes of change, more often than not, remain unpredictable. But the proof is in the pudding for the Turning Data into Action approach. So do it, and you are most certainly on the right track! Based on the valuable feedback we have received from the six Flying Labs of the first round of microgrants for this internal program, the Drone and Data team has integrated the feedback and improved and expanded the program checklist and handbook. Earlier this year, we introduced a second round of microgrants, allowing five additional Flying Labs to adopt the program through hands-on learning with close support from our team. Their feedback will allow us to keep on improving and expanding the program and make the Turning Data into Action program a real game-changer for impact.