ReleaseLabs is a new R&D initiative that specializes in engineering autonomous release systems. Why might one need such a release system? To scale the efficient release of good stuff like friendly mosquitos that reduce the spread of Dengue and Zika, like releasing ladybugs to protect agriculture; and planting seeds for reforestation and climate change adaptation in coastal zones. These are just a handful of use-cases that can be scaled through the use of autonomous release systems developed by ReleaseLabs. Our new spin-off is optimizing these systems for drone-based deliveries and for cars, motorbikes, and backpacks.

ReleaseLabs is not starting from scratch thanks to WeRobotics’ proven track record in mosquito release through multi-year partnerships with both the World Mosquito Program (WMP) and the Joint Pest Control Lab at the International Atomic Energy Agency (IAEA) and Food and Agriculture Organization (FAO). Our mosquito release work—which is now exclusive to our partnership with WMP—will continue through WeRobotics. There are some exciting developments in the works on the mosquito release front, which we hope to share soon. WeRobotics has also developed release systems for beetles, ladybugs in particular. This work on food security will continue through ReleaseLabs. 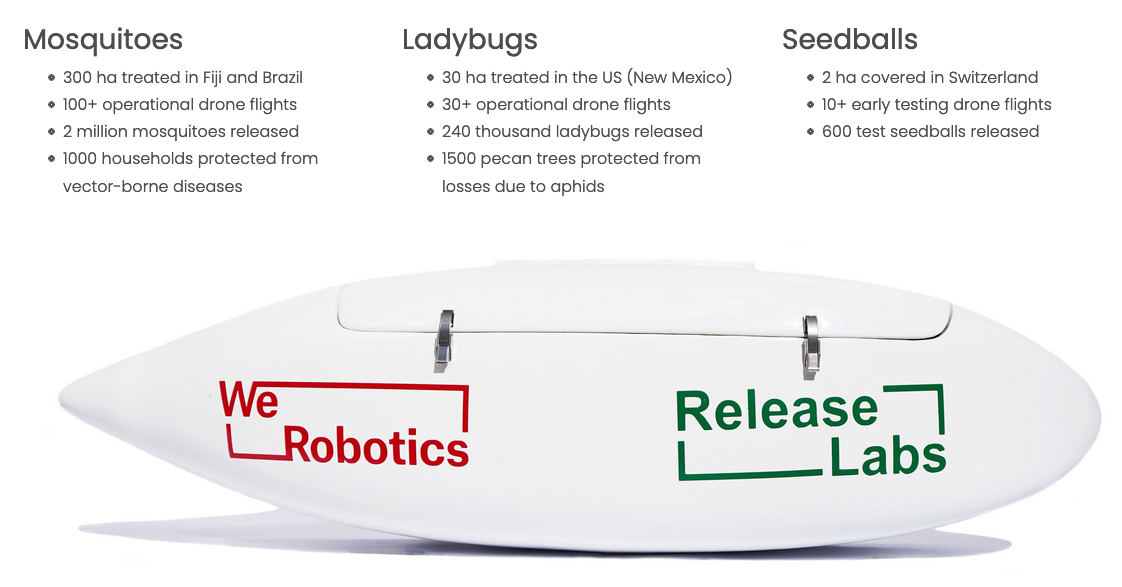 ReleaseLabs is also actively engaged in engineering and testing release systems for reforestation. Unlike other players in the seed release space, ReleaseLabs is taking a completely different approach, which we hope to make public soon. This will explain why our system will not compete directly with existing seed release solutions. Instead, our system fills a gap that current systems are unable to fill. We’re also exploring several other very interesting use-cases.

ReleaseLabs is optimizing autonomous release systems for drone-based deliveries and for cars, motorbikes, and backpacks.

ReleaseLabs is thus developing release systems for a wide range of social good projects. In contrast, most players in this space tend to focus on just one use-case, one vertical, limiting the return on investment on multiple levels. ReleaseLabs’ focus on multiple use-cases explains why the ReleaseLabs team includes top-notch engineers, developers, and robotics experts who also have 4+ years of direct experience in leading real-world deployments, a rare but essential combination. Another equally important differentiator for ReleaseLabs is their close partnership with the Flying Labs network. Most players in the release space take a very top-down and technocentric approach. In contrast, Flying Labs are local knowledge hubs led by local drone experts, engineers, and entrepreneurs. Flying Labs are operational in 30+ countries across Africa, Asia, Latin America, and beyond. They are a decentralized distribution network that is perfectly positioned to offer local services and training on ReleaseLabs’ autonomous solutions.

We’re going public with ReleaseLabs now rather than a year ago because we’re now at a point where we want to document the demand for the technologies developed by ReleaseLabs more publicly. So please get in touch with ReleaseLabs if you want to explore further. ReleaseLab is equally keen to speak with prospective partners who have different use-case needs in mind. In sum, ReleaseLabs is very much looking forward to exploring new projects and partnership opportunities. And yes, as the title of this post suggests, WeRobotics is also scoping other potential spin-offs, particularly unconventional ones.