The state of New Mexico is the largest producer of pecan nuts in the United States. In 2019 alone, local farmers in New Mexico produced well over 40 million kilos of pecan nuts. Future yields are expected to increase between 6-8% per year as thousands of new trees are being planted in new regions across the state. According to local farmers and growers, it takes pecan trees around ten years to produce pecans. While most growers still use conventional means to grow these trees, some are turning to organic methods. However, organic pecan growers are not fans of conventional methods that spray insecticides to treat their trees. Conventional agriculture tends to increase greenhouse gas emissions, soil erosion, water pollution, and threatens human health. Organic farming has a smaller carbon footprint, conserves and builds soil health, replenishing natural ecosystems for cleaner water and air, all without toxic pesticide residues. Also, organic operations’ profits can typically match conventional operations due to decreased inputs and added value of organic produce.

Insects and mites can cause severe crop losses in pecans. Three aphid species attack pecans in New Mexico: the black, black-margined, and yellow pecan aphids. Black pecan aphids are more damaging than yellow aphids. They can cause yellow, angular, and chlorotic spots between leaf veins, ultimately resulting in defoliation in late Summer or early Fall. The black, pear-shaped adults may be found with immatures feeding on both sides of the leaves. All aphids deprive the tree of moisture and all the nutrients that flow with it, and they also create a sticky substance on the leaves, called honeydew, which attracts sooty mold. None of this is good. So what to do? Instead of using pesticides, several new biological control methods are applied to relieve the stress that aphids put on pecans. Lady beetles, lacewings, and specific wasp parasitoids have successfully controlled yellow and black-margined pecan aphids. But there’s a catch: biological control methods need more careful application compared to just applying pesticides. 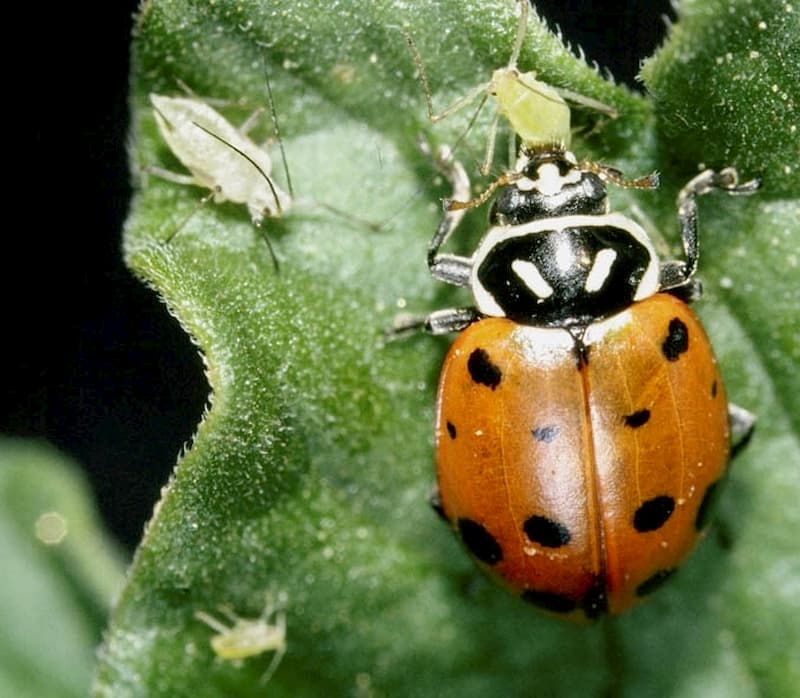 This explains why Prof. David Thompson and his students at New Mexico State University reached out to us after coming across our mosquito release work for Dengue-reduction and Zika-reduction. Their question: “Could WeRobotics engineer an autonomous, drone-based release mechanism to gently release hundreds of thousands of ladybird beetles, more commonly known as ladybugs, over pecan trees across New Mexico?” The WeRobotics Engineering Team jumped at the opportunity to answer this question by engineering a different release mechanism for ladybugs. There are many reasons why one would want to release ladybugs by drones rather than by ground. Aerial release is less work and less time consuming than ground-based manual releases. Aerial release also provides a far more homogeneous distribution of lady beetles. Furthermore, aerial release enables lady beetles to reach the tree canopy far more easily, exactly where aphids like to live. 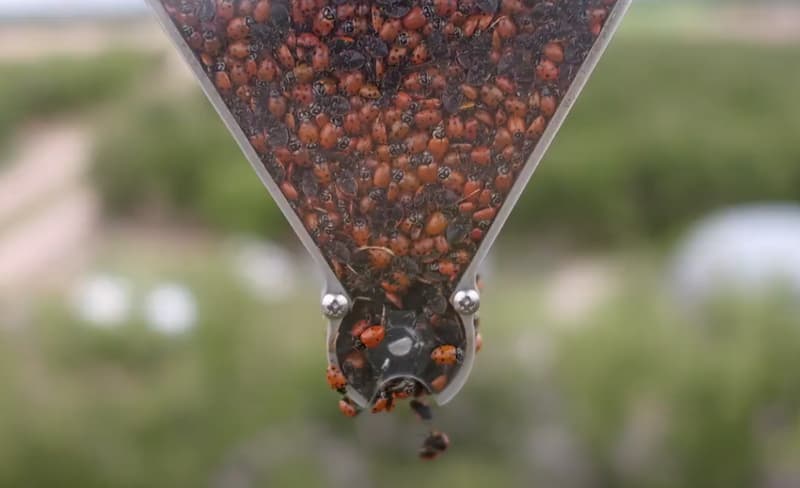 We’re pleased to share that our partners in New Mexico have made excellent use of the release mechanism we developed. They recently completed eight consecutive weeks of aerial ladybug release, releasing around 10,000 beetles per hectare in a preliminary trial at three organic pecan orchards every week. This means that approximately 240,000 lady beetles were gently released by drone over several hundred pecan trees. Beetles are easily stored in refrigerators until needed.  Ladybugs like to eat aphids, lots and lots of aphids. They typically eat 50 or more per day. So there’s no point in releasing them on trees with few aphids because the beetles are excellent fliers and will fly away immediately in search of food and water.  We hope that by dropping ladybugs into the tree canopies, they will lay eggs, and the larvae will eat their way through the aphid populations as they grow into adults that can fly to new trees.  The things one learns at WeRobotics!

The big question now is whether this use of drones to shuttle ladybugs around on all-inclusive pecan tree safaris has a measurable and positive impact on New Mexico’s pecan trees’ health, which would be good news for those of us who like pecan pies. Our partners are busy analyzing to answer this question. So stay tuned for the results! In the meantime, if you’re looking to release other types of beneficial beetles or insects for organic agriculture, food security, and/or public health, then please get in touch with us! Not to worry, if you don’t know any drone pilots in your area, Flying Labs are operational in 30+ countries and can hook you up.