Governments, international organizations, companies and even national NGOs like to hire foreign experts to carry out drone surveys. Many assume that local expertise in professional, high-quality aerial surveys doesn’t exist locally. Others aren’t bothered by the fact that foreign experts do not understand the local languages, cultures or contexts of the communities they are parachuted into. In some cases, foreign experts are hired because they have expensive long-range drones, which are deemed essential for larger surveys. The project below directly counters this Western-centric mindset.

This is the story of collaboration, innovation, and dedication, where a team of young engineers from Nepal challenged the status quo and, for the first time, carried out the longest drone survey in Nepal, which took 28 days to complete. The survey was carried out with 249 flights using a single DJI Phantom 4 Pro to capture 78,000 images surveying the 138 km Madan Bhandari National Highway. This highway connects two districts of Nepal: Sindhuli (133 km east of Kathmandu) and Udayapur. 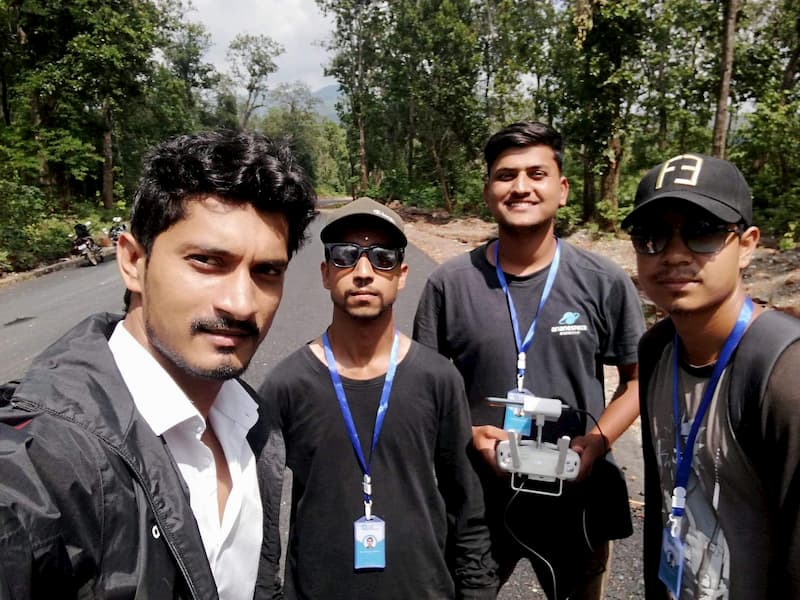 In June 2019, the Department of Roads under the Ministry of Physical Infrastructure and Transport released a call for proposals to survey 138 km of road section using drones. This project had two primary objectives:

DigiNirman, a civil engineering technological consulting firm in partnership with Dronepal, under the guidance of Nepal Flying Labs for project design and planning, successfully carried out the project with the best utilization of available resources. Together, they proved that even smaller drones can achieve challenging goals with superior resolution and outputs when projects are well planned.

The team only had one DJI Phantom 4 Pro with which they operated up to 12 flights a day, capturing up to 2500 images daily. The field survey team was traveling continuously as they conducted the aerial missions, and the batteries needed to be changed frequently. They continued doing this for 26 days, and with the help of 249 successful flights, they were able to reach the ceiling of 78,000 images.

The primary outputs of the project were:

About the Web-Based Inventory

The common practice of any surveying work in Nepal involves surveying, data collection, and submission of data from consultants to the clients/projects most often in hard copy formats and sometimes in soft copy formats through the use of pen drives/hard drives. What does not happen is effective construction monitoring, especially in a project like this, which is stretched in about 135 KM. It becomes quite challenging to cover a site that is spread in about 135 KM, let alone minutely monitor the construction activity.

This project thus envisioned the concept of a digital inventory for data management and monitoring. A web-based digital tool was also developed so that all the datasets captured under this project, along with the generated outputs, could be appropriately stored and retreated anytime when the project requires it. Its further goal is to create an interface that can also be a tool for asset management. It’s important to update information regarding the condition of the road pavement and road structures so that maintenance activities can be planned without any delay. Such smooth management requires the flow of information, and the digital interface built under this project could provide all those details in one location.

This project showed that the stereotyping of smaller drones changes as they can also perform large scale substantial tasks. This also showed the data processing capacity of new generation analysts that can work with 100k high-resolution images.

The project was full of several challenges, and the team applied different strategies to overcome it.

Strategies applied to overcome the challenges:

Our pilots in the project worked tirelessly to achieve the goal and had lots of experiences to share, including:

“The benefits of flying a drone compared to a ground survey is enormous. We surveyed 134 kilometers (total area of 16,387,985 sq.m.)—that’s 230 kilometers of fencing—in just about a month. On foot, an athletic and organized surveyor could cover only around two kilometers of the fence a day, as it is often surrounded by dense vegetation. Furthermore, the only output would have been the shapefile, while thanks to Pix4D, we were able to deliver not only that but orthomosaics and point clouds which can be used for dozens of other projects.”

~Bibek Sapkota, a geologist by education & a drone pilot/data analyst by profession

The output of the project has already been submitted. This was an important lesson for the team, and we believe that this can be meaningful learning for the other drone professionals in the drone community as well. As the project has successfully proven the potential of professionally handling a large scale mapping and survey with a small consumer drone. Also, for the Department of Roads, multipurpose outputs have been provided.

Construction monitoring is one key aspect that this project addressed. Data obtained from the drone survey could be used by the client to check if the contractors have followed design criteria in every chainage or not. The location of the as-built road structures like bridges, culverts could be checked and tallied with the design. Also, The geometry of the as-built alignment could be checked by overlaying CAD design drawing in the orthophotos, and differences in the as-built scenario and design scenario could be spotted.

Further, The project has also tried to introduce the concept of multipurpose datasets during a survey assignment. The same outputs generated from this project could also be utilized for several purposes other than road expansions. In the future, these data can be used not just for knowing the road’s health but also for multiple purposes such as Realtime Construction Monitoring, Bridge Site Investigation, Realtime Traffic Safety Simulation, Construction Material Volumetric Calculation, and Road Asset Inventory.

If not for this technology, clients would have required a lot of time to figure out construction discrepancies and, in many cases, would never have figured out the errors. Building the web-based digital interface where the orthophotos and as-built inventory was uploaded, this project paved a unique way of transparency. The digital interface could be used by all stakeholders and the public to track the progress of the project, check for construction discrepancies, question the concerned authorities about the variations. Thus, this drone survey completely changed the game for all stakeholders of the project. Government agencies should embrace this innovative technology more often to give it a chance to bloom.