“Cooperation is the thorough conviction that nobody can get there unless everybody gets there.” – Virginia Burden

In August, with the rainy season in full effect, most drone operations are grounded. Sierra Leone Flying Labs seized this opportunity to bring the Sierra Leone drone ecosystem together under one roof in Freetown with the country’s first-ever drone meet up.

The meet up was designed to bring together actors in the drone ecosystem share learnings and experiences, to network, and get to know one another. This gave participants a broader understanding of current gaps and capabilities within the Sierra Leonean drone ecosystem and identified potential areas for them to collaborate.

The event brought together entrepreneurs, engineers, enthusiasts, and a government official from the Directorate of Science Technology and Innovation (DSTI). Welcome remarks and introductory presentations were made by the Sierra Leone Flying Labs, which introduced the Flying Labs to members of the audience. Sierra Leone Flying Labs moderated discussions that were broken down into two segments. The first segment focused on ‘who,’ ‘what,’ and ‘where’ in terms of capabilities and drone use in Sierra Leone. The second segment focused on challenges that participants currently face while operating drones in Sierra Leone.

For example, drones are currently used for surveying, civil engineering monitoring, and mapping, disaster management, and media. High-end commercial fixed-wing drones are available; however, the majority of drone users in Sierra Leone rely on entry-level commercial multi-rotor drones. The ecosystem currently consists of end-users with drone fabrication and software development yet to take off.

Significant challenges also highlighted by participants were the lack of in-country skills necessary to repair equipment and the prohibitive costs associated with replacing parts. Access to accredited training and poor internet connectivity and speeds are also a challenge, making data uploads of images onto cloud platforms almost prohibitively time-consuming. Another key concern raised was the lack of drone regulation in the country and its far-reaching implication regarding safety, security, and privacy.

Mohamed Hemoh, the programs manager at Sensi Tech Innovation Hub, welcomed the initiative and praised the event for creating an enabling environment to promote an open, collaborative drone ecosystem.  He also highlighted that the lack of drone regulations and policy presented an opportunity for Sierra Leone Flying Labs and key drone actors to band together. By banding together, parties could educate and inform Sierra Leonean officials about adequate drone regulations and policies that draw on the group’s wealth of experience acquired while operating in Sierra Leone. 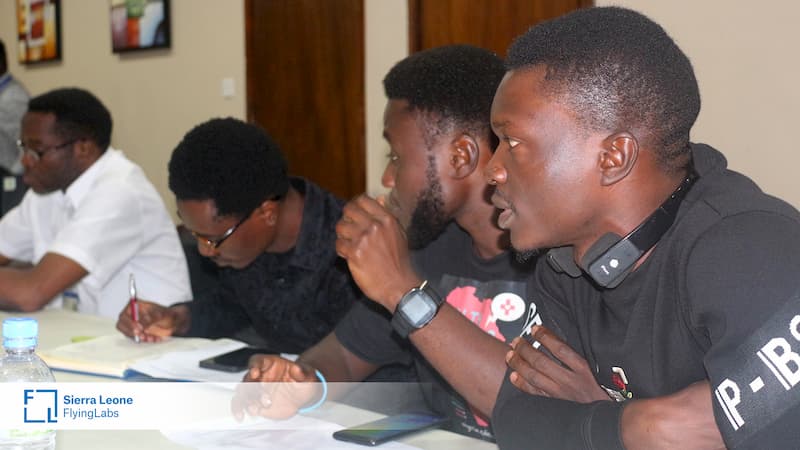