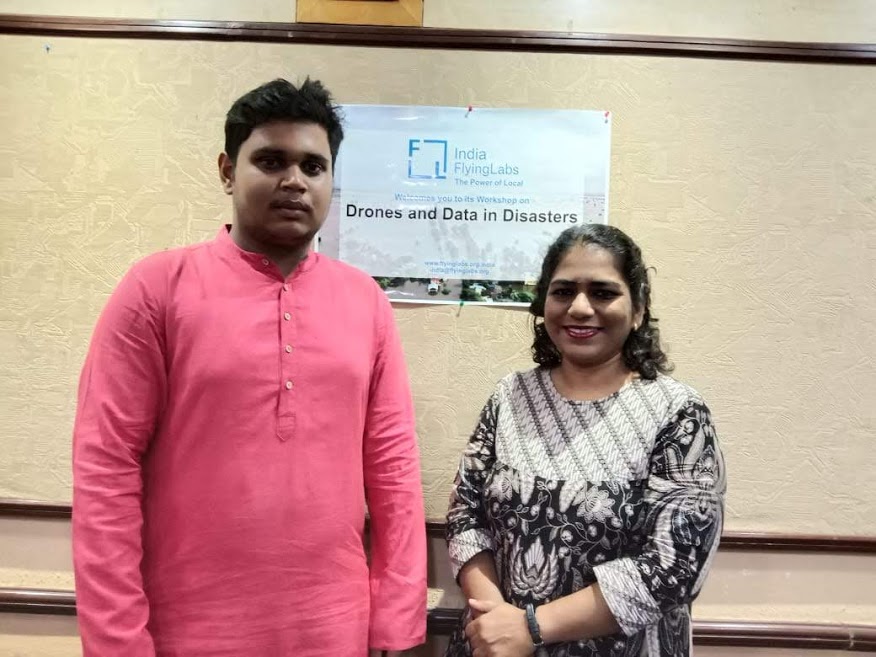 Hailing from Odisha, India, Amit Lal likes to make, fly, and sell drones. He is an inspiration for many school children and has become a mini-celebrity in his town. I first met Amit in Bhubaneshwar when we went there to demonstrate the efficacy of using drones in post-disaster damage assessment in May 2019. Atamjeet Walia, my colleague from Pixlaer in Chandigarh, had suggested we engage Amit in our project. Odisha had faced one of the worst cyclones in its history. Amit lost his drone to a dangling high tension wire just after he helped rescue a person. He took the risk knowingly because that’s what he meant to do: put his drone skills to good use when it was needed the most! How could he wait?

When I met him for the first time, I was charmed by his enthusiasm—and I told Atamjeet, ‘Atam, you have discovered a diamond!’ I never fail to mention Amit in my speeches and my blogs. So today, this page is exclusively dedicated to him. Here’s an excerpt from my interview with him.

Tell us about yourself, Amit. Where are you from? What do you do and how did you get so inspired?

I belong to Bhubaneswar. I spent my early childhood up to 10th grade in Balasore. I belong to a family where all efforts are appreciated, whether successful or not. I have the best-supporting parents one could ever have!

My inspiration is a movie from Bollywood—3 Idiots! This movie has inspired many, including me. That was the point I wanted a drone or wanted to build one. I got my first one from a hobby store, which cost me almost Rs. 18000. But the very next day it didn’t fly. When I went to the store the next day, I was denied return and was asked to buy a new one. I questioned the storekeeper, can’t it be repaired? I was told that building drones aren’t a kid’s play! That was the point I took it as a challenge.

I started reading from the internet and within 40 to 50 days, booyah! I repaired it. YouTube was insufficient to learn about making drones as it wasn’t detailed enough and often had incorrect information. Learning by trial and error, I started working on drones. I used to take damaged flight controllers and electronic speed controllers and repair them out of other broken things and then use them. Slowly I learned a lot more than just setting or assembling drones. I started understanding their behavior, and it was like I could talk to the drone and know what issues it had, why wasn’t it stable, etc. I just started experimenting inside a cricket box net so that the drone doesn’t fly away.

How can drones help society?

Drones have played and will continue to play a significant role in the present industrial revolution. A drone is a small gadget with a million possibilities. These can help stop crimes, manage traffic, transport medicines, organs, blood, food, and many more. If we adopt the better part of drones, it will only hide the evils behind it. This 21st-century society is a call for technology.

What excites you most about drones, and what is the most exciting project that you have done so far?

The drone itself is the most exciting part. Just a combination of a few motors, speed controllers, a processor, a gyroscope, a magnetometer, etc. can do wonders. Never had I thought of that! Working on drones makes one do a lot, electrical, mechanical, programming, telecommunication, and transmission, among others.

I have worked on many projects, but the most exciting project was being part of the post-disaster damage assessment team in Odisha after Cyclone Fani with India Flying Labs, where various stakeholders had gathered for working together. I feel I am blessed to have got a significant exposure there. It was the most enriching learning experience to date where a group of experts was present, and I had a lot to learn from everyone.

What are your plans for your future?

I have had a journey full of troughs and crests. From being just a kid to a self-learned drone maker to being called the ‘Drone Boy of India,’ many people have played essential roles in making me whatever I am now. I have a dream to be called Drone Man, inspired by Dr. APJ Abdul Kalam—the Missile Man of India. I want to promote the positives of drones transcending the evils.

What’s your message for the youth?

My message for youth is never fear to experiment! I would also like to request parents to promote and appreciate their wards. Millions of budding scientists stop because of a lack of appreciation and support.

How has your experience been with India Flying Labs so far, and how do you see yourself getting more involved?

The first community that brought me to the limelight was India Flying Labs. If I wasn’t included in the team, I probably wouldn’t have reached here. Thanks to Atam Sir for being the initiator of whatever I am. Thanks to Ruchi Mam for always being available to help me to learn more. I get involved in various discussions or express my ideas, and I get great suggestions from our network. I have got guides like Shashank Sir (Shashank Srinivasan from Tech for Wildlife) and many more who help me in understanding technologies and clear concepts.

This post is part of a series of stories from India Flying Labs about their partners and the excellent work that they have been doing.