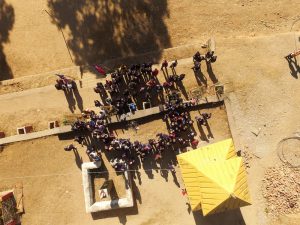 Towards the end of Phase 1 of the DrOTS (Drones Optimized Therapy System) project, Nepal Flying Labs and Birat Nepal Medical Trust (BNMT ) decided to make use of the drone images of different locations and health posts that we’d taken at Pyuthan and Sworgadwari municipality. Though the primary objectives of the DrOTS project are technology transfer and local education on the benefits of drone technology, we also decided to test the multiple applications of the datasets captured during the project planning phase to benefit the Pyuthan’s local leaders. 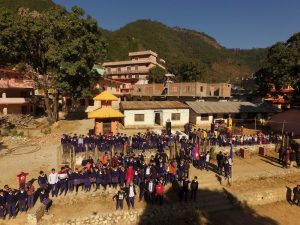 The best way to utilize the drone images captured and orthophoto maps prepared using it, was to extract updated spatial datasets for rural locations in Pyuthan. Like the majority of other rural areas of Nepal, the spatial datasets at project locations where we are working is not updated and was unavailable in a higher resolution before our arrival.

We got to meet HeadMaster Indramani Pokhrel of Janata Secondary School, Bagdula Pyuthan. He was excited about our proposal to share the datasets with Pyuthan’s officials and to introduce mapping to his students. He was already familiar with the DrOTS project, so he promptly agreed to our request to engage students from his school to utilize the high-resolution datasets and prepare spatial datasets for municipality using open-source OpenStreetMaps platform. 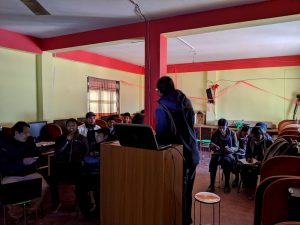 We got to meet some helpful teachers that were curious about UAVs and their uses. The first day started with educating the participants on the benefits of spatial datasets and mapping for municipal planning and decision making. The participants were also engaged in a different paper-based mapping exercise to help them learn the basics of mapping.

The technical training on Openstreetmaps started with setting up necessary software programs, including offline JOSM software on their computer. The participants were also introduced to the basics of mapping using OSM and its use in a local and global context for several purposes. Biplav Pageni, Nepal Flying Labs Program Manager, and Pravin Lamsal, Senior Drone Pilot, introduced the teachers to mapping using Java OpenStreet Mapping(JOSM), followed by a step-by-step guide on using the high-resolution drone imagery as a background layer while digitizing the images. 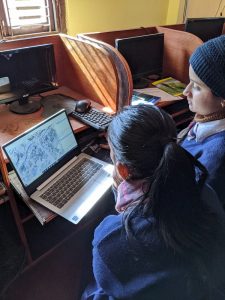 The second-day students from ninth-to-eleventh grades participated in the training. The students were introduced to JOSM’s user interface and trained to digitize their locality. Jasmine Pokhrel, an eleventh-grade student, says, “I had heard about drones being used in Pyuthan Hospital and have seen it flying along the river near our school. I was always curious about it.” She was one of the students who was also taught to open up email accounts alongside while uploading the features on OSM. The training ended with a drone flight capturing fantastic images of the school as well as the students.

At the end of the training, we demonstrated the many use cases of drone imagery captured during a medical drone survey project. We and also showed the officials and students, the importance of making the data available through open platforms like OSM, thus sharing the data to the locality in a useful form. With that, we were able to contribute to data preparedness at a municipal level and excite students in STEM education by demonstrating drone flights, engaging them in mapping exercises, and teaching them tools like OSM. Nepal Flying Labs wants to organize more of such training in days ahead, introducing drones to school kids as a STEM program.