In July 2019, I began my year-long Thomas J. Watson Fellowship to explore how drones are being used in rural communities and being used to build the robotics capacity in these communities. I had the privilege to work and learn under Tanzania Flying Labs for four months. During my time with Tanzania Flying Labs in Dar es Salaam, I gained essential drone mapping skills and bore witness to the Power of Local firsthand.

Right off the bat, I accompanied Tanzania Flying Labs Managing Director Leka Tingitana, the to a rural community called Kiwangwa, where the local drone startup, Agrinfo, was mapping pineapple farmland in collaboration with Tanzania Flying Labs. On my first day, I was told that community engagement was a significant part of the process. This was evident from the hour-long meeting that became a hands-on drone presentation for the village elders as well as youths. Although the language barrier hindered my interaction with the locals, I could see the curiosity and excitement in everyone seeing the drone in action. It was remarkable for me to see because this meeting was building robotics capacity at the grass-root level. The locals participated not just by flying the drone but also using a GPS tracking device to mark the farmland. It would be an understatement to say that this was a promising start to my Watson fellowship. When I joined this project, seeing local connections was precisely what I intended. This first experience was just the beginning of what would come.

Despite the small team size, I soon learned that Tanzania Flying Labs was a significant player, if not the only one, in educating communities in Tanzania on the benefits of drones. I was fortunate to work on several collaborations with other organizations. Still, perhaps the most compelling was with Projekt Inspire, a youth-led stem education initiative carrying out many hands-on projects. We held a Science, Technology, Engineering, Arts and Mathematics (STEAM) program called STEAMBOTS, where young students from various schools were exposed to drone use for marine conservation. Watching the kids operate the Tello and gather data (emulated through 3D printed turtles, whales, and origami spread on a big sheet of blue paper) with such ease surprised me. Still, the insights they shared and the questions they asked surprised me even more. The nurture of young, creative minds is something that I hope to bring to my own country, and this Tanzania Flying Labs program showed me how this could be achieved through collaborative programs.

We conducted two big workshops during my time with Tanzania Flying Labs. The first one was a four-day data workshop held in Nelson Mandela African Institute of Science and Technology (NMAIST) in Arusha. The workshop hall was packed, mainly with graduate students and professors from NMAIST. Together with them, I learned how to collect drone data, process it, and produce maps. This included learning various software and mobile applications to fly the drone and process the data. By the end of the workshop, everyone produced a map of the NMAIST campus and was trained with enough skills to carry out such flight missions on their own. I was also fortunate enough to present a basic introduction to programming in R and machine learning. Throughout the workshop, I interacted with several graduate students, and there was a common theme of using drone data and machine learning in their research. Given that the workshop was the first of its kind to a majority of the participants, I realized the significant role that Tanzania Flying Labs plays in not just creating awareness but also as an essential resource to everyone.

The second workshop was a day-long co-creation workshop in Arusha led by Leka Tingitana WeRobotics Co-Founder and Chief Entrepreneurship Officer Sonja Betschart. Many organizations participated, such as the Tanzania National Parks Authority, Tanzania Wildlife Management Association, Tanzania Wildlife Research Institute, World Wildlife Fund, NMAIST, Tanzania Civil Aviation, and Agrinfo. All participants gathered to discuss the potential for drone technology in their field and in their work.

One potential use of drones discussed was demarcating wetland from dry land. The present data is tough to verify since it requires physically walking to areas of interest to check and correct the data, which can take a long time. This labor-intensive work can be done quickly with drones. This use was particularly striking to me because not only mapping the demarcation was brought up but also measuring the volume of greenhouse gases since it differs significantly among different lands and hence gain insightful knowledge on climate change. At the end of the workshop, most participants were requesting a drone data workshop similar to what we held in NMAIST, which to me, reaffirmed the important work Tanzania Flying Labs carries out in Tanzania. 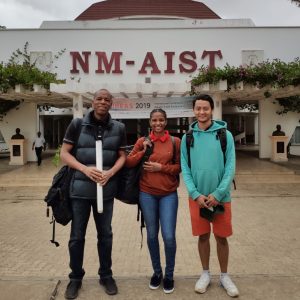 My time with Tanzania Flying Labs was one-of-a-kind, and I can genuinely imagine no better place to have started my Watson journey. I was part of this small yet crucial organization, making giant steps towards building robotics capacity in the country. The team allowed me to connect with people from grass root levels to national conservation organizations and see how they are trying to use drones to better their community. Understanding different stakeholders in the country indeed widened my perspective of drone technology. Ultimately, I hope that the skills and experiences I gained in Tanzania will not only serve to help my country Bhutan but also help me pass it on to other communities along my journey this year.

Lastly, a heartfelt thank you to Sonja Betschart, Leka Tingitana, Ghati Marwa, and Yussuf Said Yussuf for accommodating me and imparting such invaluable lessons and experiences. I would also like to thank Hub 255 for taking me in as one of their own and helping to navigate day to day life in a new place.