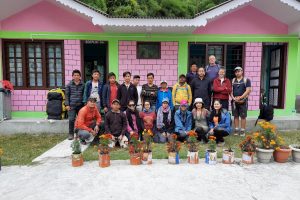 Glaciers in the Hindu Kush Himalayas (HKH) serve as a significant source of water in the region’s rivers and are clear climate change indicators. Ponkar glacier is one such glacier located at Bhimtang in the Manang district of western Nepal, at the height of ~4000 meters above sea level. It is one of the most massive glaciers in Marsyangdi with a total area of about 28.50 sq.kms, with the debris cover in the lower glacier valley and clean glacier at its accumulation region.

Himalayan Cryosphere, Climate and Disaster Research Center at Kathmandu University (HiCCDRC-KU) has been conducting glacio-hydrological research in this glacier since 2014. Back in 2015, Nepal Flying Labs’ coordinator Uttan Pudasaini and a team of researchers from KU mapped the glacier for the first time using a drone. Several repeat surveys have since been conducted annually by ICIMOD, researchers from Kathmandu University together with different other partners.

In November 2019, a field training expedition commenced at Ponkar glacier as part of the UNESCO IGCP 672 project led by Dr. Adina Racoviteanu from the Center for Glaciology of Aberystwyth University. A group of experts, including researchers from Kathmandu University, worked with students from Kathmandu University, Tribhuvan University in Nepal, and Sikkim University in India. The team took a day-and-a-half bus and Jeep journey, covering 170kms northwest from the capital. They then hiked for three days to reach the Ponkar glacier from Besisahar, Lamjung, where they studied different aspects of the glacier surface. With support from Nepal Flying Labs, a piloting team from DroNepal—the leading drone services company in Nepal—and a representative from AirLift, the team mapped the lower part of the ablation area using two Phantom 4 Pro drones. 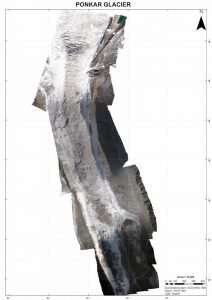 High altitudes are always tricky for drone operations. They can complicate surveys due to the significant reduction in flight endurance, difficulty for pilots in physically reaching the planned takeoff points, and broader instability issues due to strong winds in the late morning—often requiring the team to start as early as 5 am. These issues significantly limited the coverage area for the Phantom, which already has subpar area coverage in comparison to the fixed-wing drones, resulting in a three days long survey to cover an approximate area of 4 sq.kms.

The success of the 2019 Ponkar expedition showed the potential for drones (aerial and marine) in the mapping of high-altitude glaciers. Nepal Flying Labs would like to introduce drones into more of these types of projects to more accurately map the glacier, and to better understand these incredible Himalayan water reservoirs and the effect climate change is having on them.