Local challenges need local solutions, and local leaders need to take the lead when introducing new technology capable of solving complex, age-old problems. So when the provincial government leads, it’s not just icing on the cake; it’s icing with sprinkles!

Nagaland is a state in the northeast of India, on the border with Myanmar, consisting of 11 districts inhabited by more than 16 Naga tribes, each with its unique dialect and culture. The people of Nagaland have the third-best literacy rate in India.

Nagaland’s Office of State Disaster Management Authority wanted all their staff to understand how to use drones for data professionally. They invited India Flying Labs to conduct a four-day ‘Drone Data Expert Workshop’ for 36 young and enthusiastic disaster management professionals. We aimed to make the workshop enjoyable yet straightforward, using hands-on exercises on all the commonly used data tools for analyzing drone images and videos, contextualized for using before, during, and after emergencies and disasters, and extend their applications for long-term development projects in the state.

This workshop had a team of experts to facilitate hands-on, practical, project-based learning: Ruchi of India Flying Labs and Caerobotics, who leads the formation of localized UAV Rapid Response Task Forces; DroNepal’s Darpan who leads major mapping activities in Nepal (a terrain very similar to Nagaland); Patrick Meier, author of ‘Digital Humanitarians’ and WeRobotics co-founder; and Karthikeyan who uses his expertise in aeronautics to simplify the understanding of science and technology in Aiwagyam Academy.

Karthikeyan started the workshop with his ‘World of Drones’ session, where he taught the fundamentals of flight using paper airplanes. This fun and familiar activity helped the participants understand how to operate a drone and how to employ them as data collection tools. Patrick explained how drones and data are used for disasters and humanitarian action, and how Flying Labs have been implementing drones for social good locally, safely, ethically, and responsibly.

A fun-filled exercise helped the teams go ‘shopping’ for drones for their projects. Darpan explained the basics of mapping, and the teams made some impressive chart maps of Kohima city, the administrative capital, and explained how to use Google Earth for planning drone missions. We introduced them to Picterra, an AI-based tool that simplifies counting elements in an image quickly, and we were delighted to talk to Frank de Morsier, Picterra’s co-founder and CTO! The team then had a role-playing exercise to plan for the drone flights and learned about drone safety checklists and team coordination protocols.

The next day was flight day. After a week-long of fog and rain from Cyclone Bulbula, the teams greeted the bright sunny day ready to practice what they learned over the previous two days.

We came back with the aerial data from the village Meriema for the teams to learn about data cleaning, processing, and analysis. The teams practiced hands-on with Pix4D and Drone Deploy. This was the first time that we tried using Pix4Dreact, while also exploring our all-time favorites Pix4Dfields and Pix4Dmapper. The teams once again had a live session with Saksham Bhutani from Indshine, where we learned about using Indshine for project collaboration, analysis, reporting, and sharing. We once again used Picterra for counting the houses, and by now, the team handled Picterra like pros! We went back to Google Earth to view the aerial maps and made a 3D walkthrough of the village. We explored the use of Survae for viewing drone videos and then Open Aerial Maps and Open Street Maps. 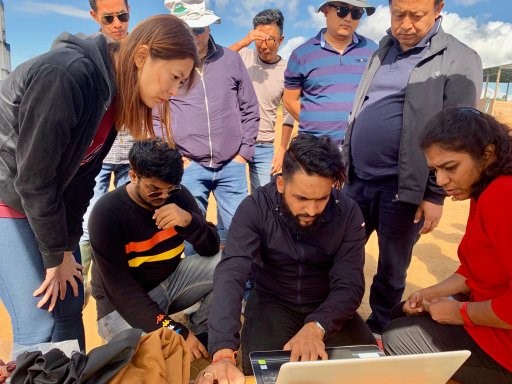 With all of this new knowledge, the teams presented their group project ideas for which they would use drones and data—all relevant to the unique local needs in the districts where they work. The projects were about search and rescue, identification of land-sinking areas, landslides preparation and monitoring, earthquake preparation, drainage planning, spraying of mosquito parricides, urban planning and resettlements, digital land records, flood monitoring, small-hold organic farming, habitat monitoring, mitigating human-wildlife conflict, forest monitoring for illegal poaching and unscientific and illegal quarrying.

The Nagas are incredibly protective of their forests, so we are incredibly hopeful that Nagaland will lead the efforts not just for disasters and development, but also conservation. The teams were now hungry for more, and NSDMA is looking forward to having one drone data center in each district and train the teams on nano drones such as Pluto and Tello before handing them more professional drones. 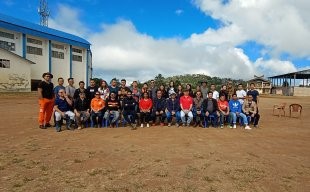 This workshop was a learning experience for us, as well. We learned and affirmed that, first, nothing is impossible if we put our minds to it. Second, strong local leadership is essential to drive technology for development. Third, a team empowered by knowledge can create ripples of positive change when given the freedom to do so.

A big thank you to the implementation team who worked hard to ensure that we had a great experience. We loved Nagaland and its warm people, and we look forward to further supporting the development of their local teams. And thank you to Officer on Special Duty Johnny Ruangmei, Secretary of NSDMA Lhochalie Viya, State Emergency Response Officer Rendemo Shitio, and Project Coordinator Noyingbeni Kikon for sparking the idea for the workshop.