After reading an article on the coral-eating Crown-of-thorns starfish (Acanthaster planci) that has been ravaging Australia’s Great Barrier Reef, La Réunion Flying Labs‘s Gilles Lebras realized that little has improved since he began diving twenty years ago in New Caledonia. Because volunteers are often on the frontlines working to restore environmental balance, Gilles imagined a new solution that could be deployed quickly and at a minimal cost compared to the use of divers or fishers. He would design an underwater drone-mounted system to reduce the population to an acceptable level. 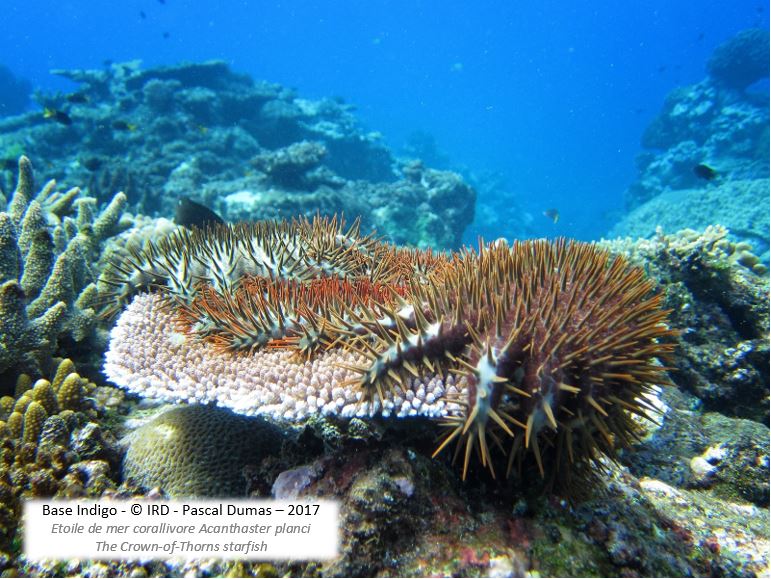 Finding a suitable underwater drone is challenging. Underwater drones often lack the equivalent functionalities and performance of their aerial brethren—at least in a comparable price and spec range. The drone would also need to carry an injection system designed to function independently of its carrier since this technology changes rapidly.

Gilles acquired two different drones to field-test. Even if they’re not entirely satisfactory, future evolutions, equipped with Gilles’s equipment, will likely better meet the mission’s needs. Further tests then began on handling, power, image quality, operation, and maintenance. To carry out his experiments, initially carried out in a pool or out at sea, Gilles began working with the Aquarium de la Réunion, which provided him with specific basins for his project.

Access to their infrastructures dramatically simplified the work. The basins were calm, secure marine environments that didn’t require a boat to access. Gilles could measure the reaction of fish to the drone and anticipate common obstacles when operating in the natural environment (currents, suspensions, orientation, etc.). In addition to evaluating the equipment, the work also consisted of defining the intervention protocols and operation plan, image processing, and gaining a better understanding of equipment maintenance.

There is still a long way to go, and the road to finding funding is barely begun (although, Gilles has been named a finalist in the Creators Challenge 2019). Then will follow the implementation of the data recovery processes that will be collected by the drones and the various embedded sensors according to the needs of the missions. Local partners, supported by their networks, will be valuable resources to advance some of the project’s topics. La Réunion Flying Labs is only one of them.