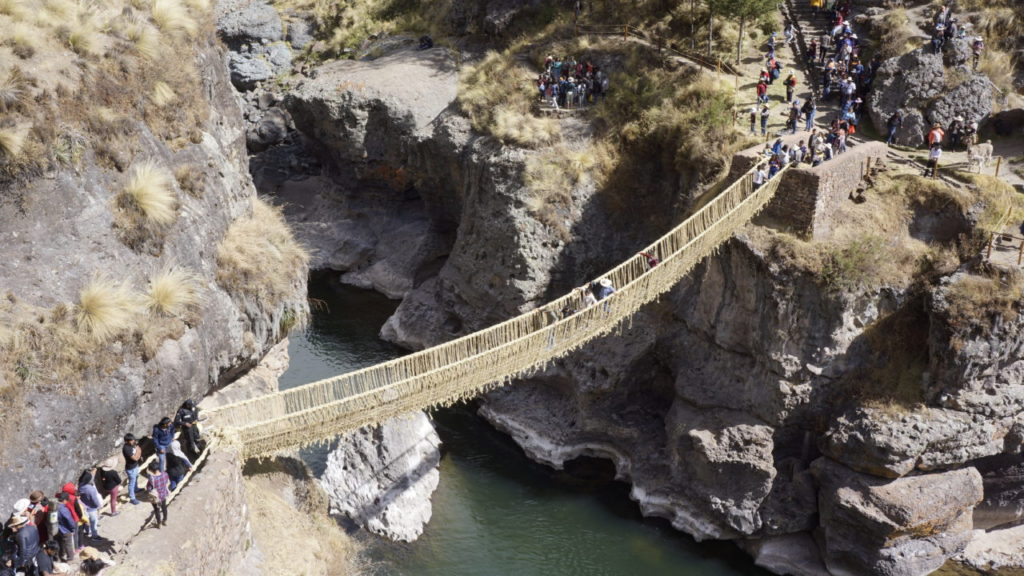 During the time of the Incas, the Quechua people made suspension bridges of vegetal fibers to cross the rugged geography of the Andes mountain range and thus connect some communities with others. Q’eswachaka is the last “living” Inca bridge today, which is renewed every year for conservation.

Three-and-a-half hours from the city of Cusco, in the Quehue district and at an altitude of 3,700 meters above sea level, is the Q’eswachaka bridge on the Apurimac River, measuring 29 meters long and 1.20 meters wide. Every year during the second week of June, the communities of Chaupibanda, Choccayhua, Huinchiri and Ccollana Quehue gather for the renewal. This process begins days before, when the villagers leave in search of the q’oya, a resistant vegetable fiber used for the construction of the bridge.

Once collected, it’s allowed to dry for one day, then struck with stones and soaked to harden. Once this process is completed, the q’iswa is elaborated, which is the union of several q’oyas to form a rope. All family members participate in this development. With the q’iswas ready, the renewal of the bridge begins, a process that takes three days and includes a series of rituals and offerings to the Pachamama (Mother Earth) and the Apus (mountains). 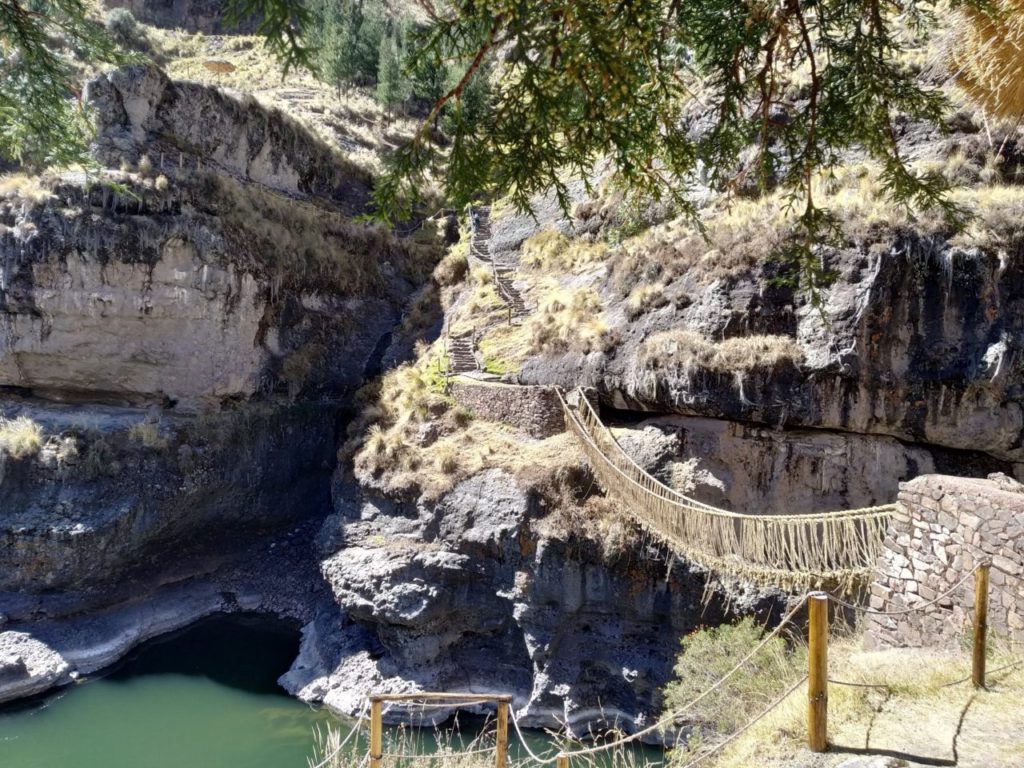 Within the Andean beliefs, the land and the mountains are considered primordial deities. A paqo, intermediary of the Apus or Andean priest, is in charge of requesting permission to these, in the form of offerings or payments, before starting any important work. The communities believe that if these offerings are not made, accidents may occur or the bridge may be poorly constructed, just as they think that the woman gives bad luck, so she cannot be present in these rituals or during the renewal. The women stay in the top of the river, elaborating more q’iswa to complete the bridge fabric. Men are the only ones allowed to be present in the work area.

In this case, the main paqo is Cayetano Ccanahuari, who begins the ceremony with products, such as coca leaves, corn, chickpeas, beer, among others, who are placed on a ceremonial stone table to be offered to Mother Earth.

This is how the Pachamama and the Apus receive these offerings during the 3 days of the renewal. 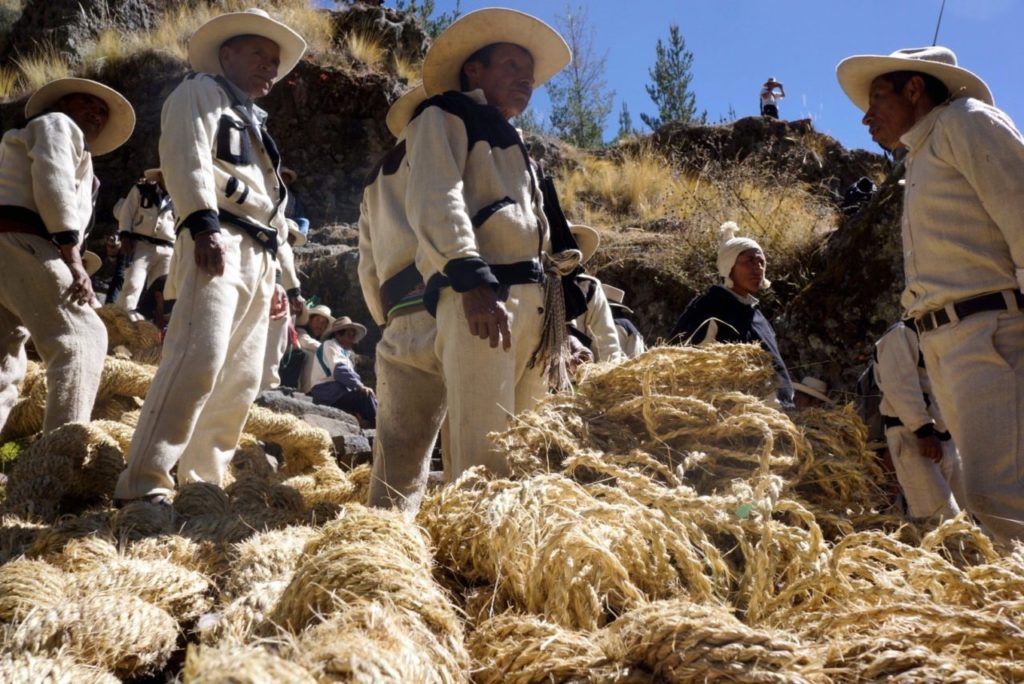 After the payment to the land the renovation of the bridge begins where each family of the different communities has the obligation of carrying a long q’iswa that will be delivered to the corresponding authorities, responsible for recording the participation of each of them, since if they do not carry out this work the family will be sanctioned. Once received, they are extended on a road located in the upper part of the river, to be intertwined and thus obtain thicker ropes, which will be the bases and handrails of the bridge. At the end of the day the large ropes are carried to the ends of the bridge and left until the next day. 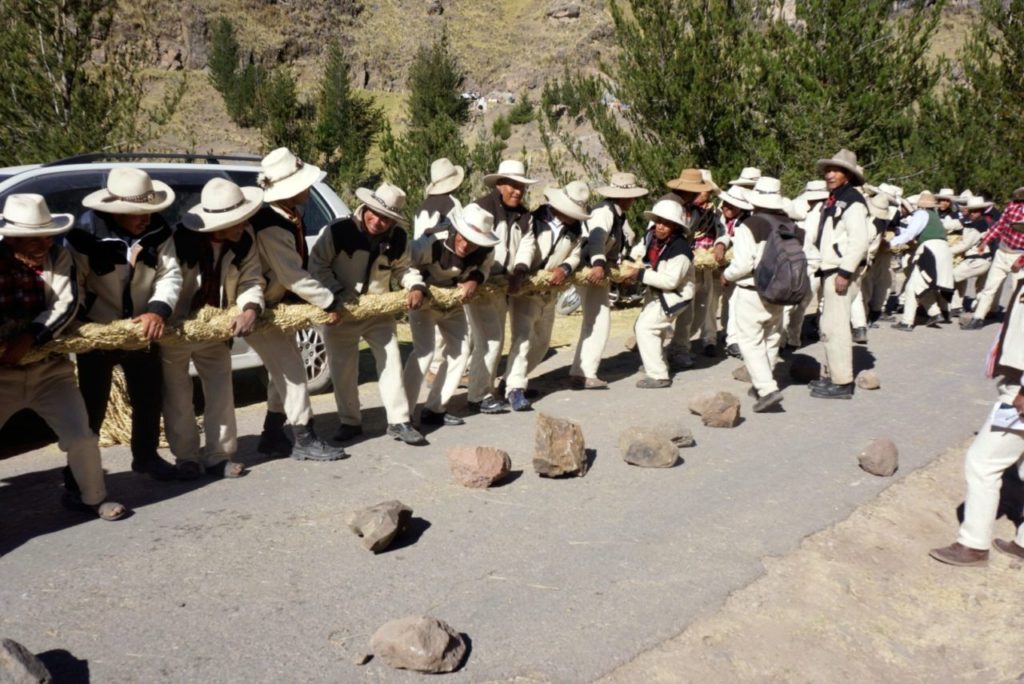 The second day begins again with the payment to the Pachamama. Then reconstruction work is resumed. A villager crosses a long q’iswa that will serve as a guide to carry the supplies from one end to the other, first passing the ropes to the base, which will be tied to each end of the bridge. When the base of the bridge is placed, the q’iswas that will be made of handrails are passed. Once they are placed in their position it is time to drop the old bridge. This whole process is supervised by the chakaruwaq or Andean engineer, responsible for verifying the good construction of the bridge.

With the bases and handrails placed, work begins on the third day. The Andean engineer with his assistants begins the weaving of the sides of the bridge joining the handrail to the base. Two groups of three people each start the work at each end and finish when they are in the middle of the bridge. This process can take several hours until its completion. While they continue with the construction, at the top of the bridge, the villagers of the Choccayhua community gather to make with leaves, branches and q’iswa a type of carpet that will cover the floor of the bridge. They also deliver some longer branches called “callapos” that will serve to give it more stability. At sunset once the reconstruction is finished the local authorities are the first to cross the 29 meters that separate the banks of the river and in this how the renovation of the last Inca bridge is completed. 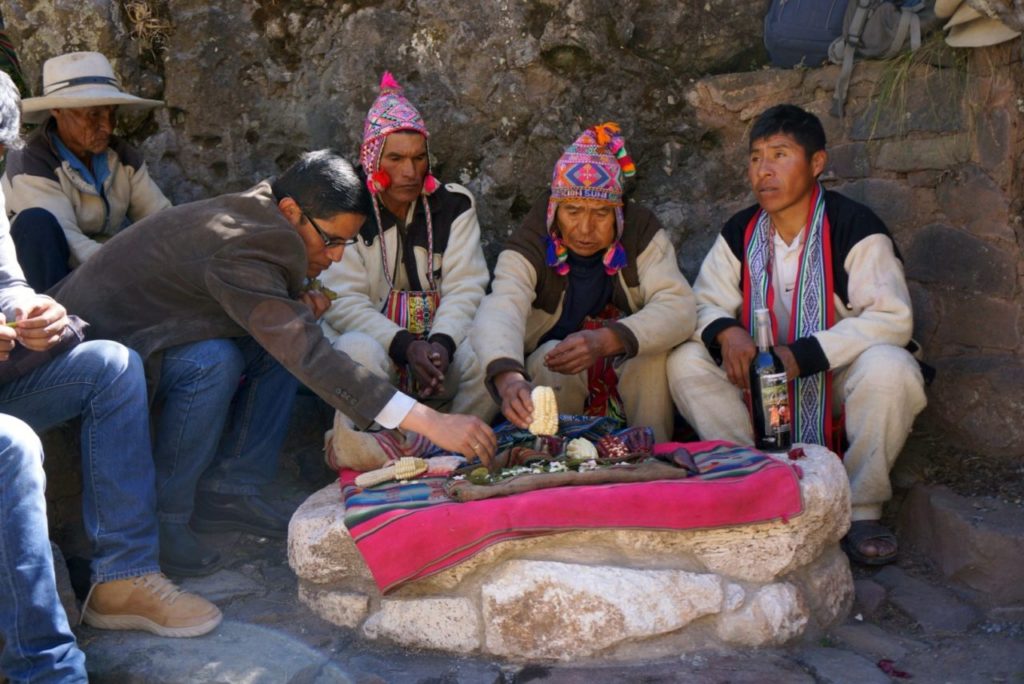 On the fourth and last day communities gather to celebrate the completion of the bridge where they eat, sing and dance from dawn to dusk.

This engineering work is kept alive thanks to the knowledge inherited by its ancestors that has been passed from generation to generation for hundreds of years.

Thanks to the collaboration of the Ministry of Culture (Cusco) and the four participating communities, Peru Flying Labs has been able to be present during this festivity recording every moment of the reconstruction, both in the air and land, and thus be a platform for dissemination of the Andean culture.