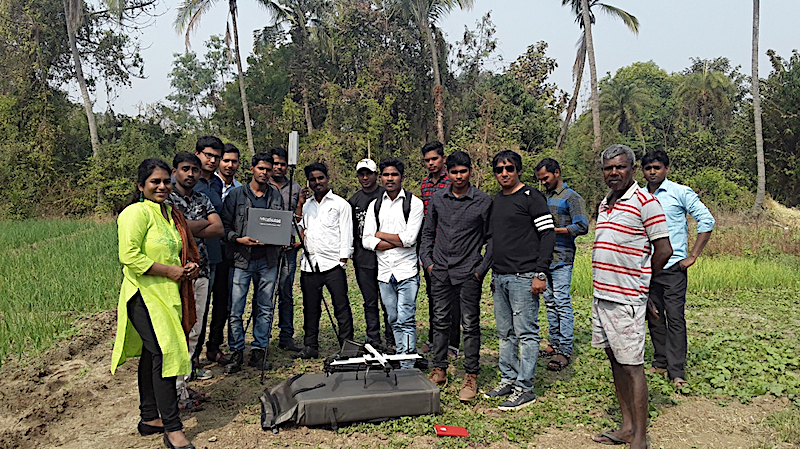 Guess who got the exclusive tickets to the official first demonstration of India Flying Labs‘ Agriculture Drones? A batch of 20-somethings from the tribal village of Bordi in the Dahanu-Palghar belt, located about 100 km from Mumbai, the financial capital of India.

Global Futures Network, a US-based INGO had been working with this group of young leaders since 2015 and grooming them for entrepreneurship and social development, and was the best partner chosen to take us to these communities.

The team’s first trip was in October 2018, a welcome home-stay with Prakash and his family where we met their group and tried to understand their needs. While the awesome food from Prakash’s mother was the real highlight of the day, the group was also inspired by the road trip to another tribal area in the north-west of Maharashtra, about 200 km from Mumbai, in the district of Nandurbar in November 2018.

They then participated in a series of GFN Tribal Youth Leaders Meetings held at Bordi and were shocked to know that since November 2018, mild tremors of magnitude 3 to 3.5 shook the region almost every other day. These tremors were large enough to scare the villagers out of their homes and force them to sleep in the open, but mild enough to draw any attention or action.

On the youth meeting planned for February 3, 2019, the agenda was to demonstrate Agriculture Drones to the youth but something happened on February 2 that stopped them in their tracks: the village suffered an earthquake of 4.4 magnitude with the epicentre in the neighbouring village of Talasari, killing a 2-year old girl and drawing attention of the authorities. India Flying Labs felt compelled to reinforce the need for a demonstration exercise, and invited local authorities also with the goal to support them in mapping disaster vulnerability.

The farm chosen for demonstration belonged to Prakash’s uncle — an orchard home to banana, cheeku, and mango trees, besides other vegetables. IdeaForge was invited to participate in the demonstration as technology partners. The IdeaForge team came with their drone ‘Netra’ and it was a sheer marvel to see a “Made-in-India” drone that could be so sturdy and beautiful, unbox before their eyes. The youth team had never seen anything like this and they were amazed by the valuable opportunity this represented to help their villages.

The team explained the basics of what a drone does, its parts and components, ground control systems, drone policies and rules to fly, process of flying permits, of drone pilot certification and its major applications in the social and humanitarian space. They showed them how drones and AI can help in accurately indicating crops’ health, timing irrigation and fertilizer according to the data from the analysis, and lastly, taking timely actions to improve crop yield. 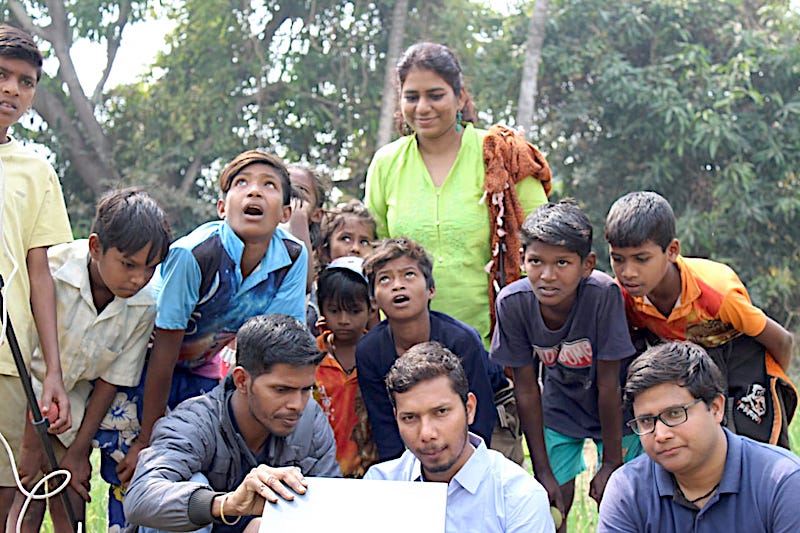 Once the drone took off, kids from the neighbourhood joined the excitement and when asked whether they would like to fly that robot one day, their resounding “yes!” was a game-changer for India Flying Labs: the team left with the promise to come back with more devices, especially for Ankeet, their photographer, who uses his cameras to capture the essence of local tribal festivals and share it with his ever-growing fan-base.

They wrapped up the day with a trip to the Cheeku-Fest, an annual festival that honours the calcium-rich fruit of the gods and the diverse local recipes, and ventured on to a cow-shed that takes care of rescued cows from slaughter houses. Last but not least, to top off the experience, Dr Ruchi Saxena, Director of India Flying Labs and Dr. Nehaal Mayur, Director of Global Futures Network, celebrated their birthdays surrounded by their teams and the local youth.

The learning journey for India Flying Labs was not just about communicating the advantage of drone technology for agriculture to young leaders for the benefit of their communities: the team had to dive into and understand local practices, community values, and real needs and challenges in order to propose solutions that everyone sees as valuable.