In 2017, WeRobotics was one of more than 500 teams to compete in the MIT Solve Challenge on Youth, Skills and Workforce of the Future. Only 2% were selected as winners, and only 1% of all the applicants received dedicated funding from the Australian Department of Foreign Affairs and Trade (DFAT) and the Atlassian Foundation. Our pitch focused on building the foundations of South Pacific Flying Labs. By winning the MIT Solve Award and securing funding from DFAT, Atlassian and the University of the South Pacific (USP), Pacific Flying Labs has been able to join our global and growing network of Flying Labs; including labs in Nepal, Tanzania, Uganda, Peru, Dominican Republic and soon Brazil, Panama, Senegal and the Philippines. Pacific Flying Labs is the first of our labs to have a strong focus on preparing youths for the workforce of the future.

Pacific Labs is a joint collaboration with USP and the university’s Geospatial Sciences Program, which is where the lab is based. Amrita Lal, an alum of USP’s program, leads the work of Pacific Flying Labs from Fiji. In the weeks and months following our successful pitch to the MIT Solve Challenge, Amrita along with WeRobotics, USP faculty and volunteers organized two dedicated trainings and projects with youths from Fiji. Amrita and team also organized and ran the first ever drones for good conference in the South Pacific, bringing together key stakeholders from Fiji and the region to catalyze new partnerships for future projects. The youths who participated in the trainings and projects included young women and men from local schools and local orphanages. In addition, undergraduate students from USP also participated in trainings on campus. As part of this initiative, WeRobotics transferred 2 underwater drones and 2 aerial drones to South Pacific Flying Labs along with tablets and relevant software. 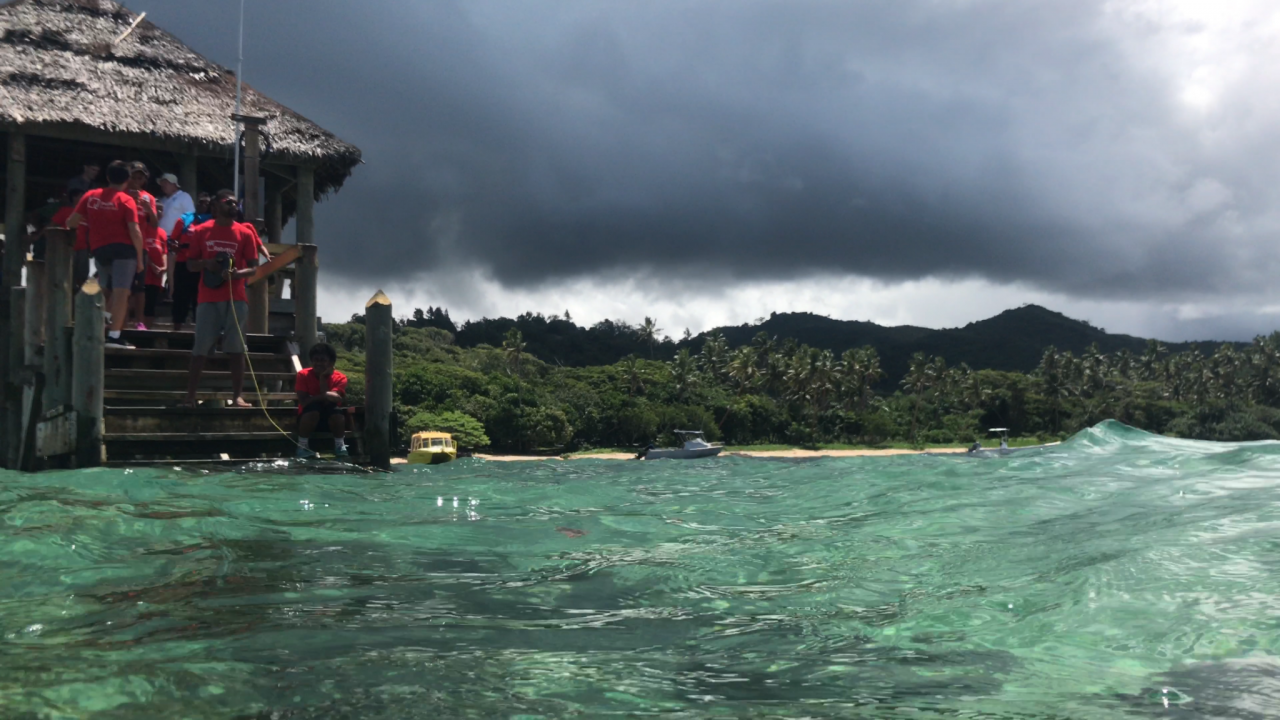 The first training and project focused on the use of marine robotics to study the health of coral reefs. Participants learned how to use underwater drones safely and effectively. They captured over an hour of underwater footage from a pier off Maui Bay. The following day, at the USP GIS Lab, they teamed up into groups and analyzed the footage. The groups learned to identify the different species of fish (particularly butterfly fish) and corals visible in the footage in order to assess the health of the corals. They also learned about how marine life is impacted by human activity including climate change. They subsequently created powerpoint slides and presented their findings and recommendations to each other. After their presentations, participants were trained on how to use aerial drones safely and effectively. This training was carried out at an approved field on USP campus. The women who participated in these trainings and projects ranged from 12 to 18 years in age and all but one were from a local orphanage. 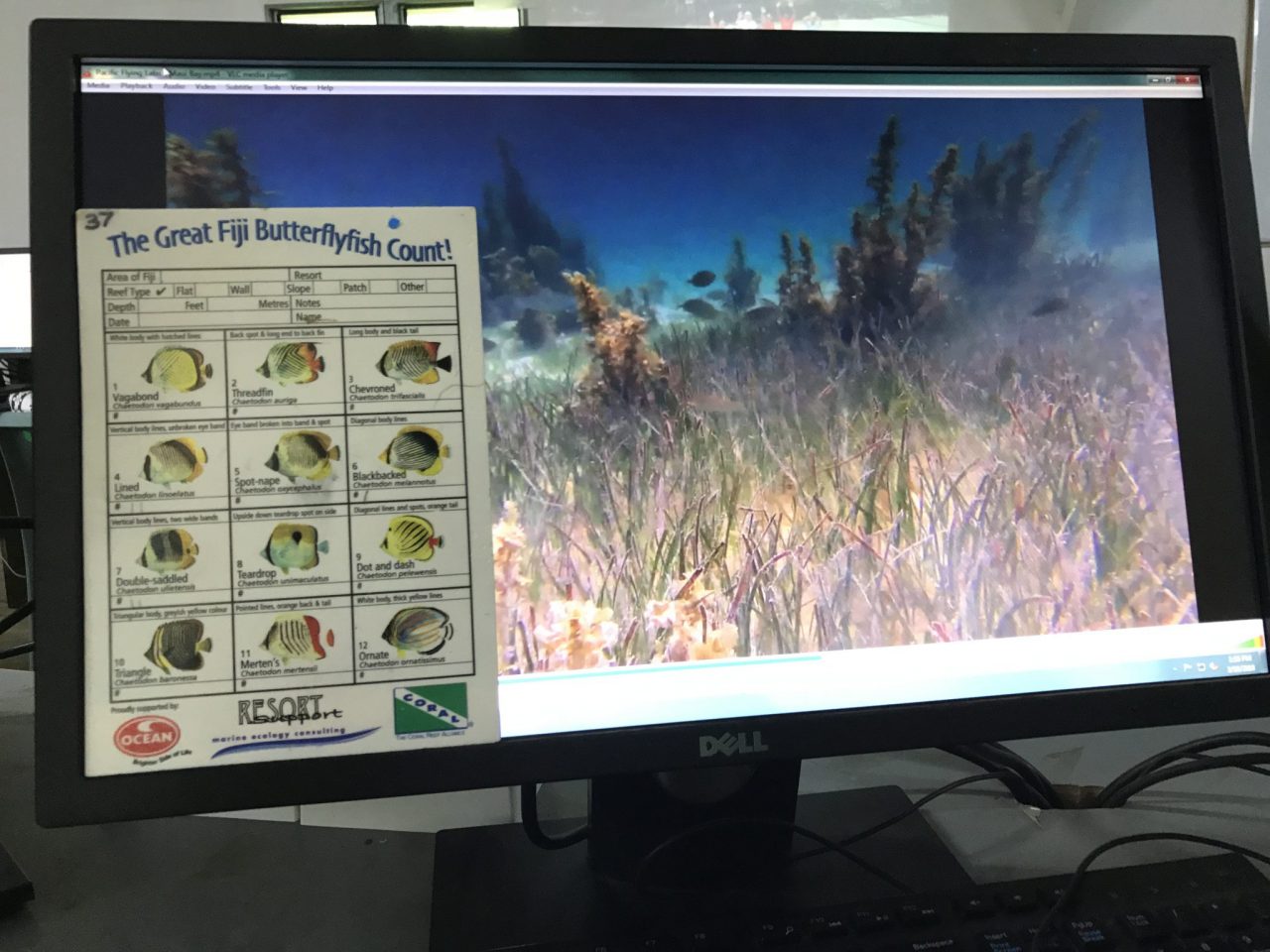 The second training and project focused on the use of aerial drones for a disaster risk reduction at an informal settlement near USP campus. The training began with a lecture on the use of drones in disaster response. This training comprised both manual flights and automated flights. The latter taught participants how to program and supervise flight plans. Following this training, the youths worked with Pacific Flying Labs to map an informal settlement. Once the imagery was collected, participants returned to the lab to process and analyze the imagery. More specifically, they teamed up into groups to identify health risks, safety concerns and vulnerabilities to natural hazards. They subsequently created powerpoint slides and presented their findings and recommendations to each other. Their findings were subsequently shard with the Red Cross. Young men (aged 17-18) and one young woman (aged 17) participated in this second training and project. Some of the youths who participated in the marine training & project also joined the aerial robotics training & project. 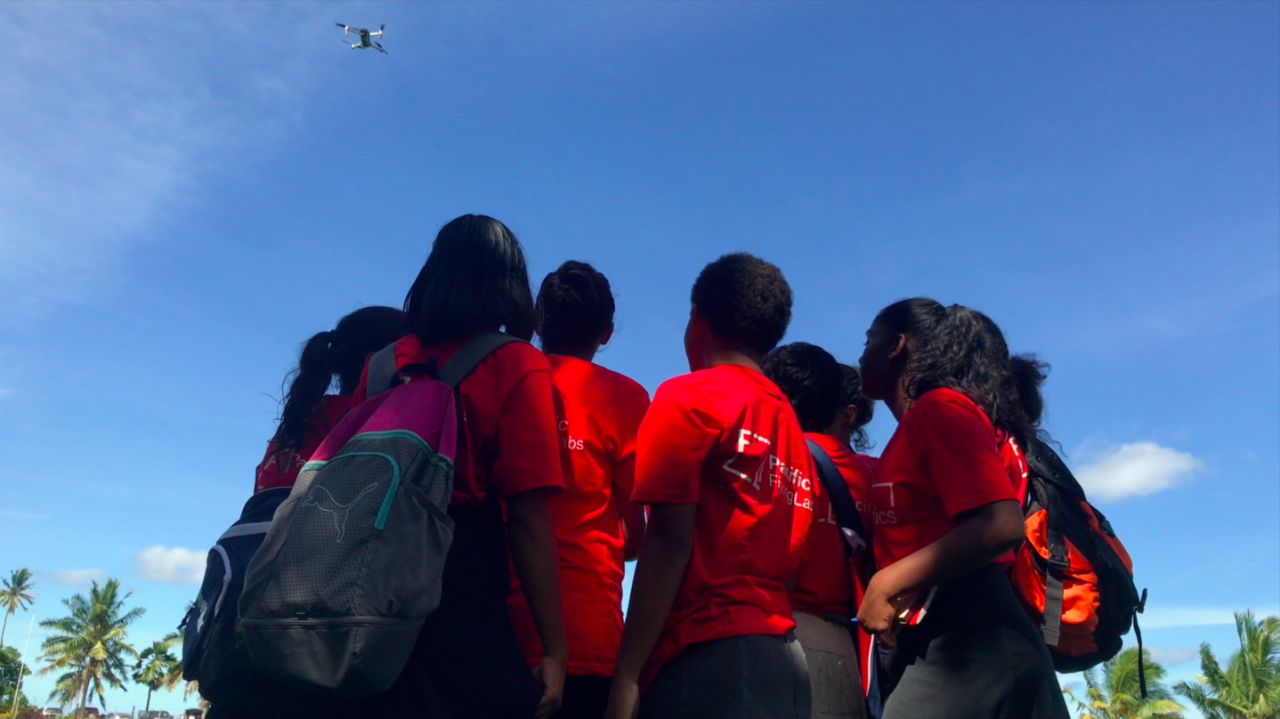 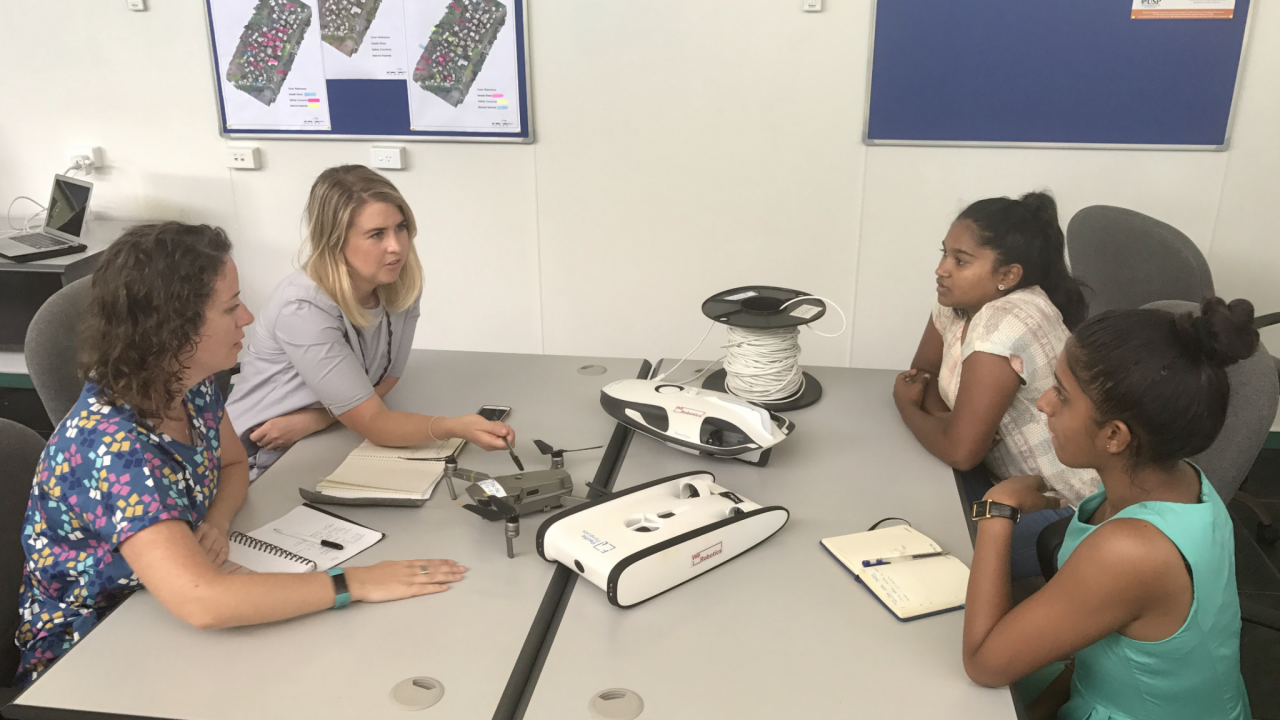 The first phase of our work with Pacific Flying Labs culminated with a full day workshop on the use of drones for social good in the South Pacific. This was the first convening of it’s kind in the region, and brought together key stakeholders to address common challenges, identify opportunities and to create new strategic partnerships. These stakeholders included the Fiji Red Cross, Australian Red Cross, Australian Center for Field Robotics, Secretariat of the Pacific Community (SPC) and several other groups. Two youths who participated in both sets of trainings/projects opened the workshop by presenting their findings (photo below; the young woman in this photo is not one of the vulnerable youths who participated in the trainings/projects). This opening session was followed by a series of talks from local and international participants working on drones projects in the region. 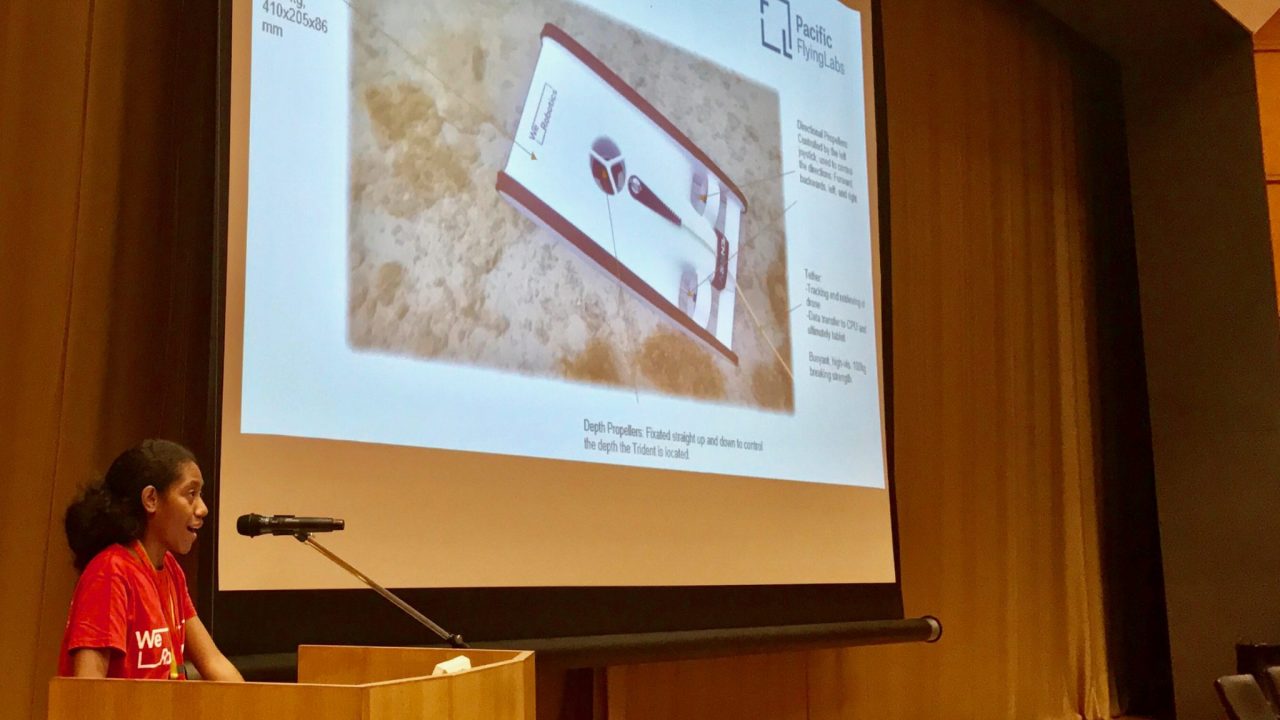 During the afternoon sessions, participants discussed common challenges and new partnership opportunities. Over 30 participants from 8 different organizations participated in the workshop. Four new strategic partnership opportunities were identified  between Pacific Labs and the following organizations as a result: Red Cross, SPC, World Mosquito Program and Australian Center for Field Robotics.

Today, Fiji is being hit by a second cyclone in just as many weeks. Amrita and team are already in touch with the Fiji Red Cross and are on standby to support the disaster response and recovery work after Cyclone Keni barrels through. So instead of hiring drone companies from Australia or further afield, organizations like the Red Cross, UN and World Bank can hire young drone pilots from Fiji to support a wide range of humanitarian, development and environmental projects. Local pilots can respond more quickly than foreign pilots; plus they know the country better, speak the local language, understand local traditions and have lower overhead costs. This is just one several ways we plan to prepare youths in the region for the workforce of the future. 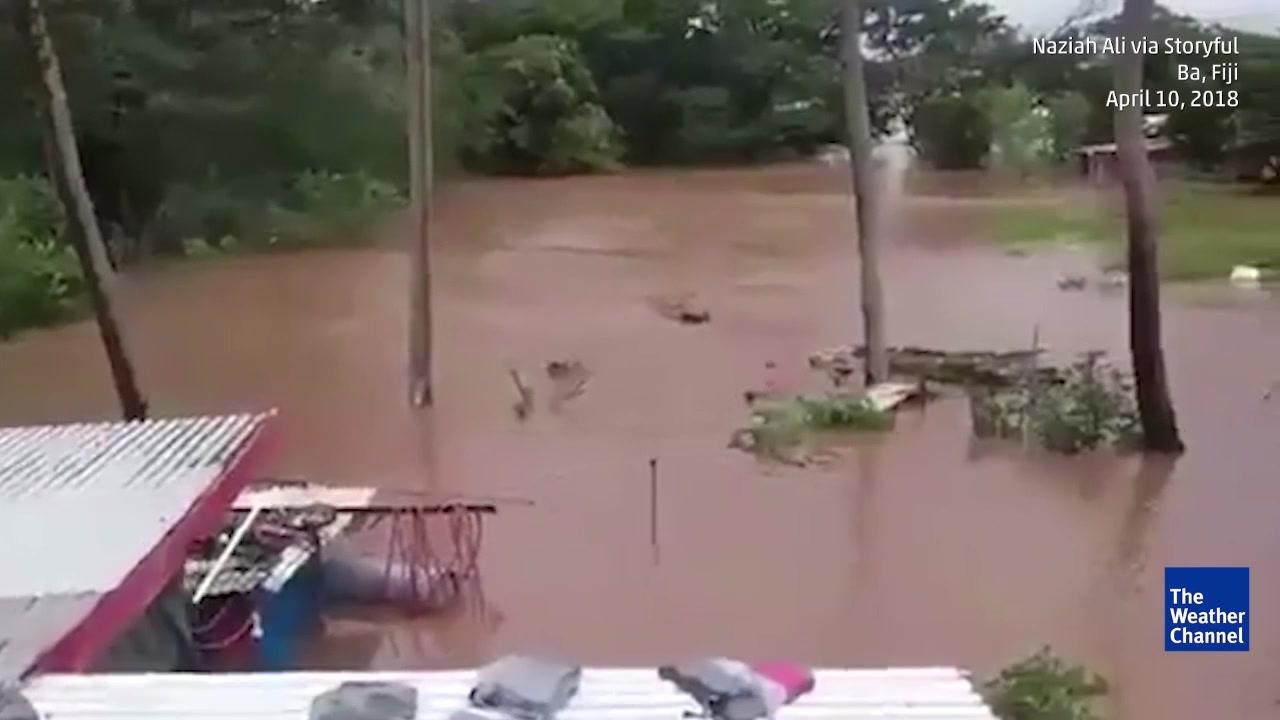