Tanzania Flying Labs has been continuing expanding the awareness on robotics solution for social good. Changing the mindset of Tanzanians, who today mostly perceive drones as unmanned planes used by military in conflict zones and wars, will result in a better understanding on how these flying robots can be an important tool for fostering the development of the nation. People need to be provided with information, explanations and use cases, as well as with guidelines and training on how to fly responsibly (like for example with our Drone Code of Conduct for Social Good). 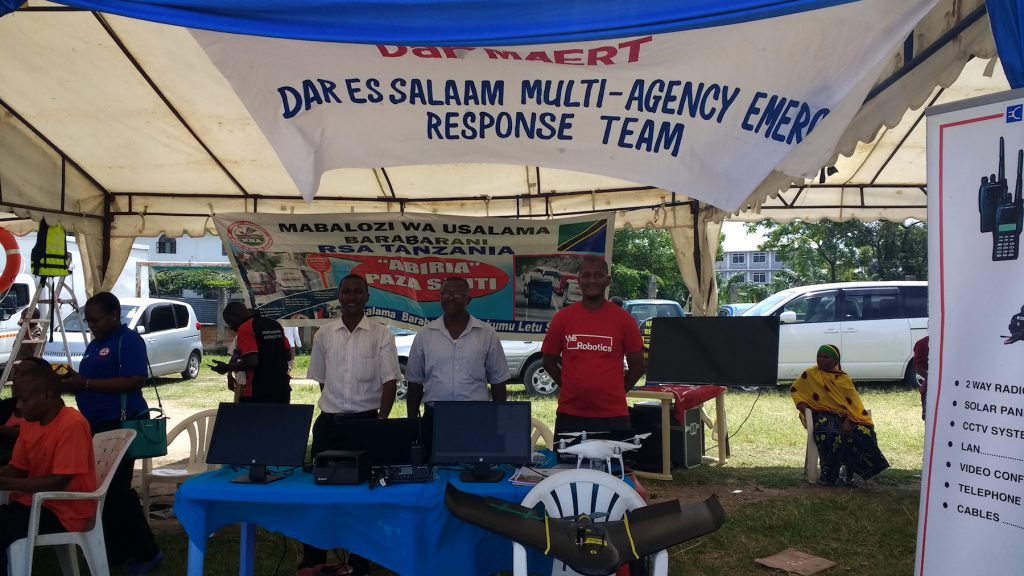 Tanzania Flying Labs is collaborating with the Dar es Salaam Multi-Agency Emergency Response Team (Dar-MAERT) and together we wanted to create awareness on how drones can be used in rescue missions and disaster response. The Fire Fighting Festival, held in Dar es Salaam in December 2017, was the perfect venue to showcase the technology and give examples on how drones can be integrated in rescue missions and when responding to a disaster.

A first example on how drones can be used was together with the Fire Force Police Department of Kijito Nyama station. The Department organized a simulation for event visitors to show how the respond to fires. In order to add to the safety of the visitors watching the simulation, we flew one of our drones to get a better overview of the demonstration area and be able to alert in case of any risks to the visitors.

Another use case for drones in rescue missions was prepared in collaboration with the Fire Department, addressing the fact that each rescue mission and response to disaster is different and that applying the correct procedures before starting the rescue mission is therefore crucial. “When we receive a call for any disaster or rescue mission, we send a first team to understand the situation and surrounding area to address the safety of our firefighters and all people involved in the mission. Only when we understand the situation, we then start saving lives.”, one of the commander explained to us.

Another simulation was staged, this time a mission to rescue people trapped on top of a building. We flew our multicopter to help the Commanding Officer to acquire additional information on the building as well as the people trapped. The aerial video provided helped him to guide his team on how to best save the trapped people. It also allowed to inquire how many people needed to be rescued as from the ground, we could only see the ones standing on the side waving their hands for help and not the ones who were lying on the ground or sitting due to their injuries.

The rescue operation could therefore start with knowing how many people needed to be rescued, where exactly they were, an initial idea of their situation (where they standing or immobilized) and a broad overview of the surrounding area.
The demonstration showed not only that the drone and bird eye perspective it allowed for was a very good tool to gain a quick understanding of an area, but also that it allowed to reduce the time for surveying the area and situation all the while making certain that no one was forgotten on top of the building.

While the help of drones depends on the type of the disaster, these two simulations allowed to showcase for the Police Force and the Festival visitors present that civilian drones are an efficient tool to help with their daily rescue operation. Drones can help save lives all the while ensuring better safety for the courageous firefighters and rescue officers.