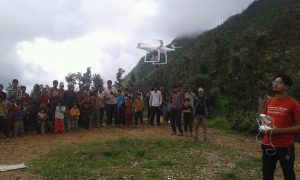 Nepal is a geographically diverse country, with almost 75% of its area covered by mountains and rugged hills. The diverse topography ranges from terrain lowlands at 70m altitude, to the highest place in the world, Mt. Everest at 8,848m. Nepal however is a developing nation, and still needs to work hard on improving its infrastructure, especially with the frequent hazards such as earthquakes, floods and landslides. Proper road network expansion has been one of the government’s main focus as it is still the country’s most effective means of transportation.

Surveying and mapping is the baseline of any type of development project. As such, we had the opportunity to team up again with our Business Incubation Program winners DroNepal to do a joint project where we were asked to map a 26 km section of road (Motinagar-Bijayapur-Talladehi section) in a remote area of Nepal.

A project of this size in the rural hills would typically take around 20 days of work with traditional ground surveying methods (Total Station and sometimes also measuring tapes and theodolites), but we were able to complete it 10 days using drones. We captured aerial images of 5cm resolution and created a 100 km corridor map along both sides of the proposed roads. The project was a success, and we were able to provide the following types of output visualizations:

These visualizations will help the engineers create designs and carry out volume calculations with a higher degree of accuracy, ensuring proper project planning and construction in the days to come.

The world bank report says more than half the Nepalese population still doesn’t have access to all-weather roads, even despite the fact that the country built about 7000 km of roads nationwide over past decade. Road accessibility has a direct impact on economies, increasing the ability for local products to reach a wider range of markets. With Nepal Flying Labs’ help, robotics technologies such as drones are helping to speed up such development projects by rapidly providing accurate data-sets, and are contributing to Nepal’s development as a nation.