Humanitarian Unmanned Aerial Vehicles (UAVs), also known as drones, are entering uncharted territory. Improved technical capabilities and falling manufacturing costs have made UAVs increasingly attractive to emerging economies. Fixed wing and quadcopter drones are successfully used in many parts of the world, and Vertical Take-Off and Landing (VTOL) drones, offering both range and the ability to hover, are a tantalising prospect for future operations. However, studies investigating perceptions of drones by local communities in developing countries are few and far between. If humanitarian UAVs are to prove acceptable, people should understand the rationale behind their use. In this study I shadowed a WeRobotics team in Zanzibar (Tanzania) and a UNICEF team in Kasungu (Malawi) to explore community concerns and look for alternative applications of drones as suggested by the interviewees. Interviews were conducted in three areas: live flying zones, areas where drone flights had occurred in the past, and in communities where drones had never flown before. A mixed method approach informed the style of the interview questions and the data sets from both countries were then collated and compared.

Part 1: The rise of the ‘ndege’: Knowledge and understanding of Drones 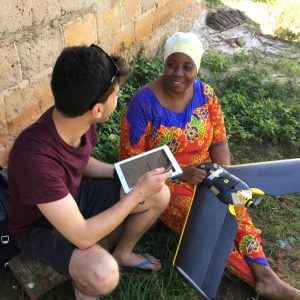 In Kasungu local communities had not been familiar with UAVs before the intervention of UNICEF and the Government of Malawi (GoM), who launched a deliberate community outreach program to increase awareness. Informed interviewees recalled that drones were used to transport blood and medical supplies. Conversely in Zanzibar local people were familiar with drones through experiencing live flights, as well as video/ radio broadcasts describing military applications. Some stated that drones were used to ‘strike terrorists’. Internet access might explain these differences.  In Malawi only 21% of interviewees had access to the internet compared to 65% in Zanzibar.

Reactions to seeing a drone in flight or on a video clip were generally positive. However some Zanzibarians expressed anxiety and confusion over how a drone could fly without a pilot and others misinterpreted drones as a ‘toy’ or a ‘speakerphone for projecting voices’. In Malawi a number of interviewees admitted that they initially associated drones with Witchcraft or Satanism and believed that without appropriate information it was likely that such misconceptions might persist. Interviewees reasoned that drones could be evidence of witchcraft because they had no pilot and witches make things that fly at night. Alternatively other interviewees debunked this theory arguing that witchcraft is intangible; you cannot see it [the witchcraft]… therefore drones cannot be it. Lastly many villagers simply concluded that drones were an inevitable development and part of necessary technological progress within a developing country.

Part 2: Preventing beheadings and the war against the armyworm: Applications of drones that could benefit communities

Interviewees were asked to suggest applications of drones that could benefit their communities and their responses did not disappoint:

On direct questioning respondents in Zanzibar and Kasungu had different views about the use of drones to transport personal mail and government documents. In Kasunga 100% of interviewees felt comfortable with this purpose compared with only 52% of interviewees in Zanzibar – one interviewee in Tanzania explaining that he worried that drones might be hacked or stolen and so jeopardise personal safety and/or government security. Zanzibarians were also far more concerned of the surveillance element of drones and especially their ability to fly over uncovered toilets and take photos.

One of the more surprising suggestions in Malawi for drone use was in criminal investigations and the monitoring of vulnerable groups of people. A number of interviewees expressed concern about the safety of children, orphans, albinos, disabled and bald men. These groups are often abducted and sometimes murdered for their body parts. In one of the more shocking revelations of the trip it was revealed that in April of this year a bald man was attacked and beheaded one night outside his front door. The perpetrators were under the illusion that a bald man’s scalp had spiritual value that could bring them great financial reward if they sold it in the body part markets of Tanzania and Mozambique. Many felt that drones could be utilized to deter criminals from committing these acts through their surveillance capability. Particularly, some stated that even if drones were being used for other purposes, their very presence could deter perpetrators because of fear of being photographed or reported.

Part 3: Explosions and Witchcraft: Fears and concerns regarding the use of drones:

70% of all interviewees had one or more concerns regarding an expanded use of drones: 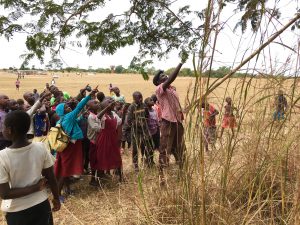 In summary, I found that drones are viewed in a positive light. Many expressed wonder and surprise at the range of applications that could benefit community development. However there remains large misunderstandings about UAVs and their purpose. Comparative analysis of sensitised and non-sensitised communities in Malawi shows that community outreach programmes are a vital component of UAV programmes. This is evidenced by the witchcraft misconceptions among non-sensitised people. Furthermore, it appears that internet access is a function of open-mindedness. In Zanzibar, awareness of military drones contributed to a heightened fear of privacy intrusion and risk to personal safety. Comparatively, in Malawi a lack of prior knowledge of drones meant that they were far more accepting of alternative uses of drones than their Tanzanian counterparts. This clear distinction between perceptions of drones shows that access to the internet and media sources can have a powerful effect in influencing how people view the potential benefits of drones. One consideration would be to conduct operations in countries where internet coverage is low. This would mitigate the effect of negative associations with drones by first introducing people to the positive applications.

For future humanitarian UAV operations I would recommend expanding community outreach programmes. This should include extensive consultation with community members on alternative uses of UAVs and improved dialogue explaining UAV safety. Importantly this must mitigate the fear that crashed UAVs will burn down houses. Next, UAVs should avoid landing in gravesites and flying over areas of worship. This was considered culturally inappropriate.  Finally, UAV operators should consider not flying drones during the night to mitigate associations with witchcraft. Generally, communities felt that drones should be flown daily although avoidance of Holy days (Friday and Sunday) was mentioned several times.

—
On Tuesday, August 15th at 9am EST, WeRobotics will be a hosting a webinar entitled: “Witchcraft and Explosions: how do community perceptions to humanitarian drones differ in Tanzania and Malawi?” Speaking will be the author of this article: Alexander Fraser, BSc Geography Undergraduate student at the University of Edinburgh. You will be able to watch the webinar at this link.