It’s a little hard to imagine, standing before the peaceful Pacific waves, the devastation experienced by Punta Hermosa during the recent coastal El Nino storms.  Rainfall about 10x about normal levels lasted for weeks and saturated much of northern to central Peru between March and April of this year. This quiet coastal community, about an hour south of Lima, was the scene of torrential flooding which tore through the town’s midsection. The storms left behind a grey, silty sediment over much of the area when the mudslide waters receded. That sediment is a dull reminder that in these days of rapid climate change the rains can and do arrive unexpectedly with ferocious, lasting, and even transformational, violence. 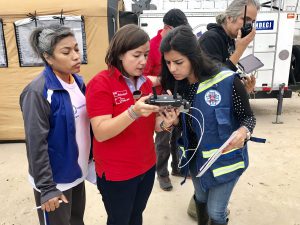 Here in the calm filtered light of a Punta Hermosa morning we are gathered again with our colleagues from the World Food Programme (WFP), and members of Peru’s public, private and nonprofit disaster management structure, to experiment collaboratively with the use of aerial robots and spatial data to enable this country and others like it to rise to challenges of our increasingly unstable environment. This simulation is part of an ongoing global effort which began in the Dominican Republic and will continue in Myanmar in July and Niger in October to develop baseline conditions and best practices for safe, effective and ethical integration of UAV technology into disaster management workflows. Along with WFP we are joined in Peru by COEN (Peruvian Civil Defense), CENAPRED, INDECI, and many others.

Out on Punta Hermosa’s football field a team of UAV pilots from the voluntary association Plan Andes grabs their gear from the depths of the bus which ferried us from Lima and head off with confidence and determination in the direction of the northern gate. Plan Andes is a group of highly talented pilots committed to social justice, who up until now have been leading many of the practical discussions around how to plan UAV operations for disasters. There’s a moment of general confusion back amongst the coordination unit as they try to determine whether Plan Andes is intending to go through the gate and set up base camp outside the perimeter of the field. If they are, that could be a problem, given that our flight permissions limit us to the area of the field itself. Has there been a miscommunication or is this part of the plan? More information is needed to be sure.

Runners from COEN race off to track down the Plan Andes team.  Fortunately, everything’s fine; they had built their flight plans the night before and set the home point from right inside the outer fence.  In moments, a DJI Inspire 1 lifts off into the diffuse morning light to map the dry riverbed which several weeks ago was a scene of chaos.

The COEN and INDECI coordinating teams from that point forward maintain close contact with the field teams, almost all of whom are from the private and nonprofit sectors. Peru Flying Labs is amongst them. This country has a rich non-governmental network of drone operators eager to participate in disaster response and social good actions; this event is one of the first to showcase for official actors what they’re capable of.  Data comes back in gigabytes.  Three overlapping flights are soon being processed in Esri’s Drone2Map software.

While the 2D processing goes forward, rapid feature detection of markers placed around the area proceeds using the raw photographic imagery.  Analysts start to speed things up by making guesses as to specific coordination points based on the center point of the photographs.  Other teams start marking down street intersections using a combination of photographic data and local knowledge. Communications between teams isn’t working as well as it should.  Others complain that these sorts of ad hoc methods won’t allow them to share data later, and instead go ahead with the photogrammetry. 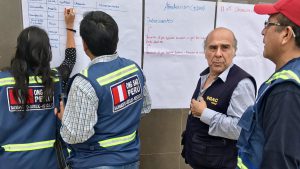 In the end, the guesses and local knowledge end up dramatically speeding up the finding of simulation markers. However, the photogrammetric purists are also right – the only feature data capable of being shared afterwards comes from shapefiles derived from analysis of the orthomosaics.

The key general point is that workflows which demand speed above all else are likely to be the most improvisatory and the least likely to produce clean, shareable information.  Regardless of what the instruction set looks like, teams under time pressure will tend to do their own things.  The core question following that observation becomes not whether systems should be designed principally around these improvisatory cases, but whether drone-enhanced disaster response has room for both high accuracy and high speed. It’s still an open question.  Under any scenario though, strong communications to make sure everyone is aware of the methods being used by other actors are absolutely crucial.

The field simulation built off of two days of strong dialogue between all the gather government, nonprofit and private sector actors. Some of the key insights from these conversations include:

Although progress against some of these goals may turn out to be uneven or slower than expected, all participants agreed that this type of agenda setting exercise will likely be a turning point in terms of convening the aerial robotics and disaster response communities around an agreed upon horizon of action.

With the simulation concluded and the sun setting over Lima, celebratory glasses of Pisco were raised by friends and colleagues to the promise of a new hope in the future of Peru’s resilience to climate pressures and the emergent capacity of UAV technology to support their efforts.