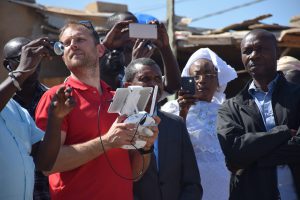 WeRobotics cofounder Adam Klaptocz recently traveled to Senegal to take part in a 3-day drone GIS demonstration and training. The event was organized by the Deputy Minister in charge of Restructuring and Requalification of the Suburbs, DARZI, and local NGO UrbaSEN, and involved flights over the communes of Djiddah Thiaroye Kao and Médina Gounass.

Over the course of the demonstration, 3 Senegalese staff at UrbaSEN were trained to pilot UAVs, conduct flight missions, and create GIS maps. In addition the flights that took place resulted in several usable maps coverings 40 ha of central Dakar, as well as digital surface models, 3D models, film, and images all showing the flooded areas of the above mentioned suburbs. These data products will be used to help these affected areas plan and control for future flooding, and that the people who were trained will ensure aid in the future.

Below we see the map created of Medina Gounass. By comparing with the background satellite imagery we can the rapid change in the community since the satellite flew over.

Even more impressive is the 3D model of the community, created using the double-grid feature of Pix4D Capture and a 70 degree angle of the camera, resulting in a clear reconstruction of the walls that were mapped. You can check it out on Pix4D Cloud (Warning – RAM intensive).

Our Senegalese partners were extremely excited to learn about using drones for GIS and have acquired their first DJ Phantom4Pro for initial work in the community. This opportunity also served as perfect scoping for a Senegal Flying Labs, and we hope that the enthusiasm and eagerness to learn that we were met with will lead to more drones and robotics being used for social good in the community.