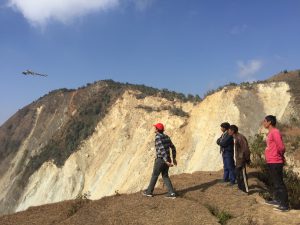 In coordination with Medair, Nepal Flying Labs has mapped the Ramechhap landslide area, one of the largest landslides in Nepal. The information can save lives by precisely identifying vulnerable households and areas. This data will also prove useful as a baseline for similar disasters in the future. We plan to process the data into a format usable by a wide range of organizations involved in disaster prevention and rescue. In the future we also plan to use UAVs routinely in conjunction with response organizations to build accurate maps in areas with a history of recurring disasters, establishing detailed pre-disaster understanding of risks and vulnerabilities.

The earthquakes on April 25th and May 12th, 2015 left millions homeless in areas of western and central Nepal and killed over 8,000 people. Already prone to deadly landslides, the earthquake made matters worse by weakening the geological structure of the land. Aftershocks have strained the fragile mountain ecology and terrain, which were already vulnerable to landslides, especially during rainy seasons. Certain settlements may be required to relocate either because their settlement is currently uninhabitable or because may become vulnerable in in the future.

One of the major problems during a landslide is not just rescue and safety but also a lack of information. Due to the difficult geography and lack of proper road infrastructure, gathering enough information to launch a rescue operation can take days. In a situation where minutes can make a difference of life and death, clearly a better solution is required.

The current state of Landslide and Vulnerability Mapping

At present, the methods of mapping landslides are time consuming and expensive. There are two options being utilized for this problem: traditional ground-based surveying and the use of satellite imaging. The first method, is where surveyors are present in the field and perform mapping using traditional tools. This is dangerous to the surveyors as they have to work in hazardous disaster zones, takes a long time, and the resulting data isn’t as accurate and detailed as required for proper vulnerability mapping. Additionally, in Nepal there is terrain which is virtually inaccessible on foot making land-based surveying nearly impossible. The other option, satellite mapping, is expensive and isn’t usable in many situations where minute details are required for a small area. In comparison to UAV based mapping, both of these options are too expensive and time consuming.

Commercially available drones on the market, even low-cost ones, are capable of mapping many kilometers in a single flight, capturing high resolution, multi-spectral images. These images are of a quality better than those captured by expensive satellites or mapped by land surveyors. The speed in which UAVs work is also highly efficient. Regardless of terrain and land conditions, they can cover many kilometers in a few minutes with data more accurate and detailed compared to surveyors on land. Maps created using UAV images can also aid in relocation activities, forming a high-resolution orthomosaic base layer that communities can supplement with rich contextual social layers. In field work completed with similar conditions (disaster aftermath, difficult terrain), UAVs have outperformed other methodologies in all criteria including cost, time, and accuracy of mapped details.

Project in Partnership with Medair

Nepal Flying Labs succeeded in a project with similar scope through a partnership with Medair, a Swiss organization working in disaster relief in rural communities all over the world. Together we carried out a survey of a massive landslide in the hills of the Ramechhap district that has claimed dozens of local farms and is at risk of engulfing local villages. The range of elevations involved in mapping of this landslide made it an extremely difficulty challenge, with over 800m in elevation change between top and bottom of the landslide. The 3D flight-planning features of senseFly’s drones, as well as extensive experience in drone-mapping of mountainous terrain, were key to the success of this project. You can see results of this mission in the video fly-by below: