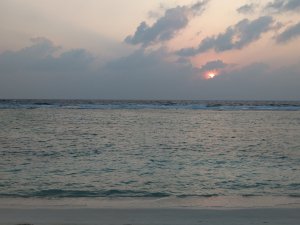 Standing on the sloping sandy coastline of the mostly artificial island of Hulhumale in the early morning, one can see both the rising sun and the setting moon in the same glowing azure sky. The effect is startling, as if space folds in on itself and time crawls to the luxurious pace of the lapping waves. In the presence of such beauty one can almost be forgiven for forgetting, momentarily at least, that you are facing the front lines of global climate change.

The Maldivian archipelago, spread across roughly 300 square kilometers of atolls and open ocean, most of which stands no more than 1 or 2 meters above sea level, is among the most at-risk inhabited zones on the planet. It is here that global sea level rise is already experienced less as prognostication and more so as ever-present existential threat. Here, vast tracts of bleached coral reefs foretell massive long-term risks to ocean ecosystems, and in turn to the communities that depend upon aquatic life. Here, even moderate storms produce coastal and inland flooding on what seems like a constantly accelerating schedule. It is here as well that a young and dynamic urban population presses hard against the limits of some of the world’s most fragile ecologies, while a government and private sector only recently arrived into “middle income” status struggle to manage complex trade-offs between economic growth, technological change, disaster risks and environmental protection.

Towards a Drones for Disaster Management “Knowledge Hub”

I find myself on this particular beach as part of a WeRobotics team tasked by the United Nations Development Program and the Maldivian government to enable the country to prepare for and respond more effectively to disasters. Given their location on the front lines of climate change, preparation for disasters in the Maldives extends almost inevitably to exploration of better ways that the country can adapt their infrastructure to the emergent realities of climate change, in which low-level crisis has become routine, and mid-level crises requiring significant responses are becoming altogether too frequent.

Our role is to help them to understand how the country’s distinctive geographic challenges, social assets and risk landscapes may benefit from emergent automated technologies, particularly drones, and enhanced means to process, manage, interpret and communicate the outputs of those technologies. Drone mapping and modeling, linked to robust geographic information systems (GIS), have the potential to open up significant new spaces for practical knowledge and efficient action along the entire continuum of emergency management. Coastal elevations and land area changes can be understood precisely, impacts can be seen aerially in real time, and search & rescue operations can be dramatically improved. The results of our efforts will hopefully be a new institutional “knowledge hub” within the National Disaster Management Center (NDMC) which can employ some of the best of contemporary spatial technologies to mitigate some of the worst impacts of climate change. 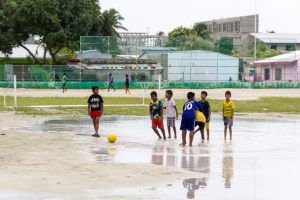 The groundwork for this effort was laid several months ago by a joint mission attended by our colleagues at DJI, the world’s leading commercial producer of small drones.  At that time, WeRobotics and DJI met with a range of public and private stakeholders to scope out the broad contours of a plan for effective use of drones and drone-based data for emergency preparedness and response. While DJI has since then been able to leverage their distinctive advantage as a technology producer, in partnership with UNDP, to supply Maldivian government agencies with new hardware capacity, WeRobotics has engaged more at the level of process innovation, analytics and information management. Each side is crucial. Without access to technology many viable solutions may remain just out of reach. But, as we have learned time and again, technology on its own solves very little. In addition to new hardware, software and data, meaningful change requires new ways to engage communities, government and private institutions in regular applications, collaborations and cumulative learning.

The Maldives is in many ways a kind of natural laboratory for technological and social collaboration in disaster management. Over the past several years the NDMC and other partners including the Maldivian Red Crescent Society recognized that centralized management alone is insufficient to their geographic challenges. Resources in the capital Male simply lie too far from many of the islands which are likely to experience weather-related shocks to pursue a strategy which depends predominantly on small numbers of professional teams. Instead, they have instituted a set of what are called “Community Emergency Response Teams” (CERTs) to move the locus of action closer to the level of the affected communities themselves. Communities in the Maldives, perhaps because of their relative youth, also tend to be relatively technologically savvy. Smart phones, consumer drones, cellular data and other information technologies are distributed throughout almost every one of the populated islands. It’s not a huge leap of imagination to see the CERTs deploying a full range of automated information technologies. What Maldives lacks, however, is an effective means to connect the CERTs and other community members into an efficient means of collecting, transmitting, interpreting and acting upon the data they’re capable of producing and accessing.  At the heart of the Maldivian “knowledge hub” therefore lies integration of information management and community response. 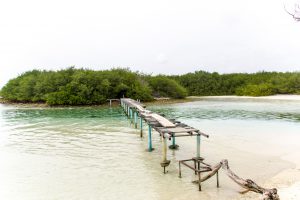 Distributed community strategies and centralized professional efforts are not an either-or proposition, especially when it comes to drone applications and spatial data.  While many aspects of impact assessment and damage analysis can only be driven by having volunteer teams proximate to events, many aspects especially of long-term baseline assessment require strong scientific approaches. Detailed mapping of coastal erosion on shifting atolls, for instance, can be tricky to master at high levels of accuracy without regular practice and relevant area knowledge. Crowdsourced imagery can provide significant near-real-time access to observational data, but that observational data may only become fully meaningful by pairing it with a strong basis in environmental models and official data. Fortunately, the Maldives may not need to choose.  For at the heart of the “knowledge hub” strategy lies an emphasis on “both-and,” hybrid community and professional, approaches.

On our final day in the Maldives, as we sit down with the leadership team at UNDP to review our observations and recommendations, I’m struck by precisely this hybridity, fluidity and creativity. What is most likely to work in the Maldives, and ultimately in small island countries facing very similar challenges in other parts of the world, will not be a single approach. Communities will play lead roles in becoming better-trained disaster response actors, using emergent technologies like drones and collecting spatial data to contribute to enhanced remote sensing for resilience. However, they will also need to rely on enhanced capacity in government and the private sector, in order to ensure that their efforts feed into efficient resource mobilizations rather than backhanded insistence on do-it-yourself disaster response. WeRobotics continues to learn from our partners and to focus on ensuring that robotics applications for social good are grounded in community ownership and bottom-up processes. But we also recognize that local communities require strong support across society, as well as internationally, in order to succeed. After a week on the sandy shores of the Maldives I remain convinced that these types of “both-and” collaborative approaches to technology and resilience are among our best chances to adapt broadly and democratically to the strange new worlds beckoning from the other side of our planet’s changing climate.