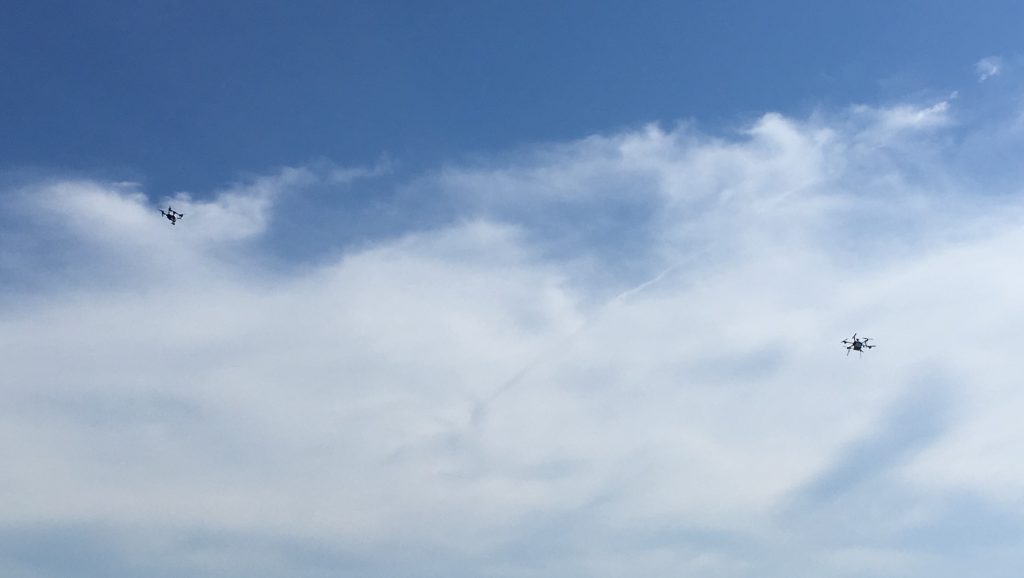 Last week, the Field Innovation Team (FIT) along with the New Jersey Innovation Institute hosted the Drones in Disasters Design Do-Tank in Cape May New Jersey. The event was attended by numerous representatives from the robotics industry, the humanitarian sector, academia, and local government agencies. WeRobotics was invited to attend and witness a few important drone demonstrations.

Upon arriving at the Cape May Ferry Terminal, guests witnessed a historic ship-to-shore drone delivery demonstration, carried out by Flirtey and co-organized by John Hopkins University. The drone was loaded up with blood samples and other biological materials, and then flown out to a barge at sea, successfully landing despite heavy winds. On the barge scientists replaced the samples with medicine, and the drone flew back to where it began, lowering the cargo down to Earth via tether. One of our Technology Partners at WeRobotics, a company called Quantum Systems, carried out a similar demo earlier this year with the German Coast Guard–see video below:

Following this demo, Rutgers University demonstrated their own unique drone/submarine hybrid, a quadcopter that could submerge itself and continue travelling underwater, as well as then re-emerge and fly back to land. Our colleagues at Oakland University developed a similar solution called the Loon Copter. They won the million dollar challenge at the prestigious International Drones and Robotics for Good Awards in Dubai this year, which WeRobotics keynoted.

Later at the NASW Aviation Museum, Luftronix demonstrated their self-navigating drone which charted its route by sensing its surroundings, flying in close proximity to hazards indoors.

On day two were presentations from members of United Nations Office for the Coordination of Humanitarian Affairs (OCHA), the American Red Cross, Southern Alberta Institute of Technology, UNDP, and UNICEF.

The Design Do Tank was a great opportunity for people from all different sectors to come together to either show their technology to others or to learn about drone technology and how it can apply to their business. Humanitarian aid in particular was the central focus, and as shown with the delivery of medicine from an offshore barge, there is certainly a place for drones and robotics in this field.